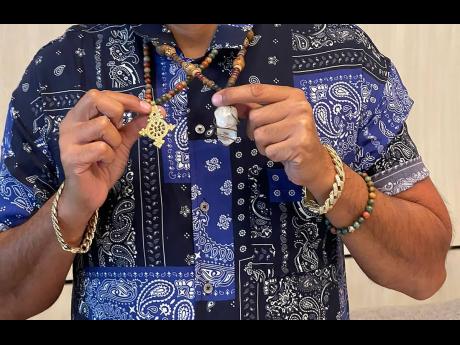 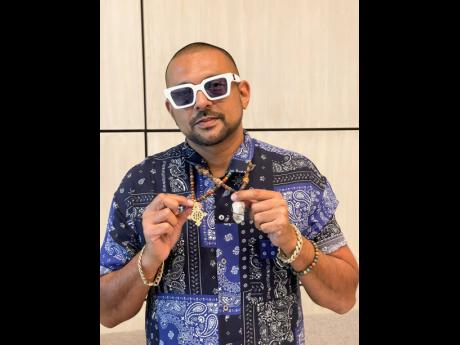 Photo by Stephanie Lyew
When we met up with Sean Paul, he was wearing an Ethiopian cross gifted to him by the mother of a friend of his and a crystal given to him by Lee ‘Scratch’ Perry. 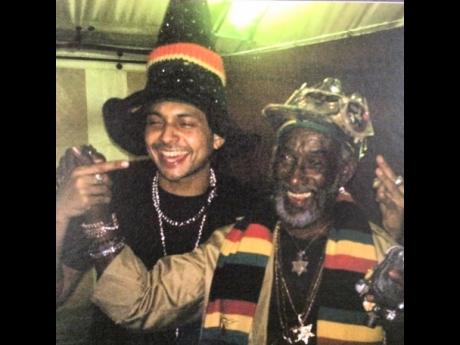 Contributed
Sean Paul (left) and legendary record producer Lee ‘Scratch’ Perry. Sean Paul recounted the story of how Scratch Perry gave him a crystal in 2005 that he now wears as a pendant.
1
2
3

Gold chains and bling are a dancehall deejay’s best friend. Nothing completes the look like the right jewellery. Many of Jamaica’s male artistes have found unique ways to shine, from Shabba Ranks wearing eight gold rings and four thick gold chains...

Gold chains and bling are a dancehall deejay’s best friend. Nothing completes the look like the right jewellery. Many of Jamaica’s male artistes have found unique ways to shine, from Shabba Ranks wearing eight gold rings and four thick gold chains stacked around his neck and Elephant Man’s old-school ‘chapperita’ chains to Tanto Blacks wearing watches on both hands and Chi Ching Ching’s blinged-out grills.

For years, Sean Paul wore a simple necklace with the cursive initials ‘SP’, and he also has the classic diamond Cuban-link chain. He has some treasured pieces in his collection, including a custom-made rope chain and pendant shaped like his previously mohawked-head, bought from prominent New York jeweller Elliot Avianne, which was said to be worth over US$200,000. He has also had his neck adorned with large beaded chains, and lately, the Temperature artiste has the ice in storage, but the stories behind the necklaces he is wearing now is really – for lack of words – cool.

“The first one was made by a close friend of mine’s mom. The signature part of it is the pendant ,which is an Ethiopian cross, and I always wanted one but didn’t tell anyone that. She’s ill now, and every day I wear it, and I say a little prayer for her,” Sean Paul told The Sunday Gleaner.

He continued, “The other pendant, a crystal that I have had for years, has a crazy story behind it.”

Sean Paul said he was gifted with the peculiarly shaped jewel in 2005 by legendary record producer Lee ‘Scratch’ Perry, who might as well be dubbed ‘The King of Bling’.

“This was back in Sweden. After a show, MTV was interviewing me, and all of a sudden, I feel someone putting something on my head. When I look, is Scratch Perry, and he is setting a big merlin hat on me,” he said. “Then he proclaims to everyone in the room: ‘Sean Paul is the new reggae merlin’. I mean, by this time, everyone is laughing and giggling because Scratch is a very eccentric person, and he’s now sitting there with his beard all done up and wearing all these chains. So they invite him into the interview to speak about music.”

While the interview was going on, both shared their love for and appreciation of each other’s music, but Sean Paul could not concentrate when he felt his hand being squeezed under the table.

He said: “He starts putting something in my hand, doing it all nice and discreet. Then the media kind of leaves the room. I look in my hand, and it’s a crystal. And I’m puzzled, and Scratch is like, ‘Yeah, a you dat’.”

Superstitious persons, in Jamaican culture, would be quick to ask, ‘A wonder if a obeah him a try obeah me’, but the multiaward-winning reggae-dancehall entertainer kept it safe for over 15 years. “Well, I haven’t had any bad things happen to me, so I know it wasn’t obeah,” he quipped when the thought was raised.

The stone, or possibly selenite, is a crystallised form of gypsum formed when sulphate and calcium-rich salt water evaporates and has been called a ‘calming stone’ that is believed to protect or help with spiritual cleansing. It was added to a box of ‘precious jewels’ collected throughout tours to different countries, and from the beach, where every now and again he would find some unusual looking things, including stones by the Egyptian pyramids, he shared.

“It’s the ones I think look unique. Yeah, I took up stones from the pyramids that I thought looked like it might have dropped off. The crystal from Scratch, though, I hadn’t made it into a necklace until this year. I recently moved into the house I was building, and I was, like, ‘Oh yea, that box’. Steve Urchin’s cousin [Earth and Moon] makes jewellery, and so we got her to do that.”

Scratch Perry being an influential force in reggae and dub music has inspired Sean Paul though he finds it hard to choose a favourite track of the icon’s catalogue. The collection of music is endless, he said. “There are those he’s done with Bob Marley back in the day, like Mr Brown and Concrete Jungle - the bass and drums, all the sounds he did before even dub music was recognised.” The two have yet to collaborate.

“I love his music and just appreciate the blessing he has given to me. It reminds you - people always try to be serious or take things too seriously, but then there is Scratch, who doesn’t let anything bother him - to be free,” Sean Paul said.