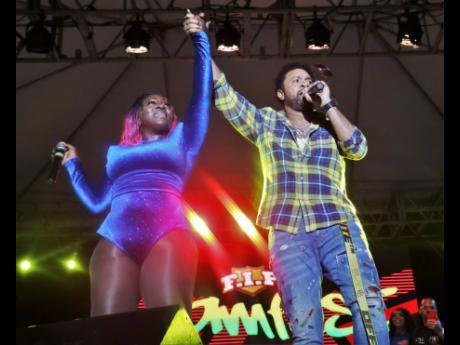 File
Spice (left) said she is grateful to Shaggy for making ‘10’ a reality. 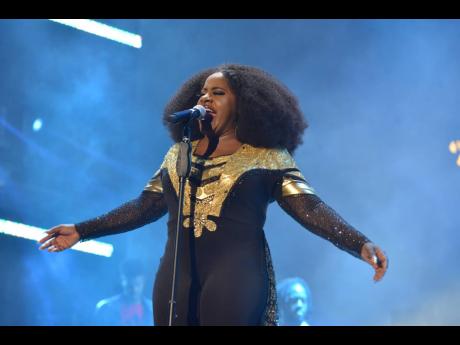 File
Etana is celebrating her second nomination in the Best Reggae Album category. 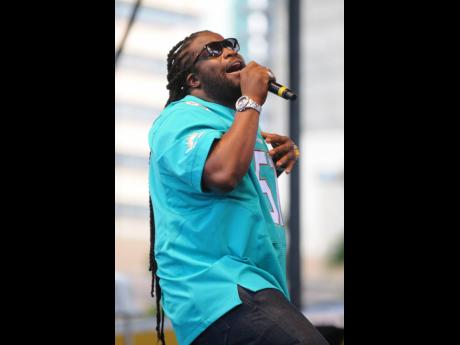 File
Gramps Morgan said Spice, like the rest of the artistes named, deserved the nominations.
1
2
3

Queen of Dancehall Spice could hardly catch her breath after singer-songwriter Carly Pearce announced that her debut album 10 was nominated for a Best Reggae Album Grammy. The full list of nominees include Pamoja by Etana, Positive Vibration by Gramps Morgan, Live N Livin by Sean Paul, Royal by Jesse Royal and Beauty in Silence by US-based reggae band SOJA.

“I feel extremely overwhelmed with happiness that I'm actually nominated,” she told The Gleaner. “I also just found out that I'm the first hardcore dancehall female to be nominated in the category of Best Reggae Album, so this is just historical for me. It means absolutely everything to have this milestone attached to my name. It's been a long time coming.”

The Love Her artiste explained that her progression is owed to many contributing factors but that she is a living testimony that “hard work and prayer pays off”.

“Thanks to Shaggy, my hero, for stepping in and making this album a reality. Big up to Sean Paul for collaborating, VP records for all the work, and my fans who supported the album. It was a major group effort,” Spice continued.

Principal of Khool International and Spice's booking agent Ray Alexander was at a loss for words and expressed gratitude to Shaggy, who executive produced the album, for his guidance. “He helps with the selection of the rhythms and really guided her. It is a good look for dancehall and more so as she represents as a real authentic dancehall artiste and the tracks that are on the album, too. I am so proud of her,” he said.

Gramps Morgan said Spice, like the rest of the artistes named, deserved the nominations. The reggae royalty was celebrating the nomination of Positive Vibration and the hard work that he and his team put into creating it.

“I am very happy. I worked very hard putting together this album with my team and I believe this body of work has paid tribute to the history of our great Jamaican music from the past, present and future. I'm excited for people who [haven't] discovered the album to take a listen to it,” he said. “What I have to say about the fellow contenders is that they have done an incredible job putting together some of their best work. Spice has worked so hard to work, promote, and allowed herself to work with one of the greatest artistes of our time, Shaggy. And yes I have listened to a few of the albums. They are great works. Jesse Royal has done an amazing job, as well as SOJA. Etana has grown so much as an artiste and represents the women of the reggae-dancehall community very well.”

Meanwhile, Etana is celebrating her second nomination in the category. The Pamoja album features Stonebwoy, Alborosie, Damian Jr Gong Marley and Vybz Kartel, which again is another highlight for dancehall.

“I was not tuned in to the announcements. My other half, Andre Morris, called me and told me 'Congratulations on your nominations'. He was out of breath. I screamed and we were both overjoyed. My heart was beating so fast. I was actually doing all the arrangements for the family Thanksgiving dinner, so it was a pleasant surprise. I am elated and grateful to all the people in music who thought this album was worth their vote. I am extremely grateful to my partners and all the talented creators who played their roles in this project to bring all the ideas to life,” Etana told The Gleaner.

Shenseea also has reason to celebrate after a whopping three projects she contributed to received nominations for the 2022 award ceremony. Shenseea is featured on Kanye West's Donda album which has earned two Grammy nominations for Album of the Year and Best Rap Album. She appears on the tracks Pure Souls with rapper Roddy Rich, and Ok Ok Pt 2 which also features Rooga. On Masego's Studying Abroad: Extended Stay album, she appears on the track Silver Tongue Devil. The album has earned the Grammy nomination for Best Progressive R&B Album. She appears on Major Lazor's Music is the Weapon (Reloaded) album which has been nominated for Best Dance/Electronic Music Album. The given track is Tiny which features BEAM. Shenseea is listed as co-author on all tracks.

Several adjustments have been made ahead of the 64th Annual Grammy Awards, including the elimination of nomination review committees. Nominees in some categories have also been increased. Harvey Mason Jr, CEO of the Recording Academy, said the number was increased because of the “extraordinary growth” observed in the music industry, which saw record-breaking song releases per day.

The extraordinary growth is evident in dancehall and its representation in this year's Best Reggae Album nominees. Royal by Jesse Royal features a collaboration with Vybz Kartel, while Sean Paul's Live N Livin has a host of reggae and dancehall acts, including Intence, Mavado, Agent Sasco, Chi Ching Ching, Skillibeng and Squash, among others.

The Grammy Awards ceremony will be held at the Staples Centre in Los Angeles on January 31, 2022, and broadcast live on CBS.