Tina B starts year as a ‘Champion’ 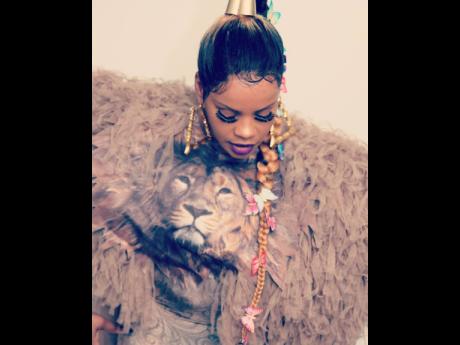 Contributed
Tina B says her new single ‘Champion’ is not about being rich.

Sitting on a throne by the bridge at Cassava Piece, St Andrew, is Tina B, adorned in a crown and black gown, with gold accessories abounding. It’s a striking scene in the Damanic Visualz-directed music video for her single Champion, which premiered on New Year’s Day. The track is a self-affirming anthem and testimony of Tina B being “the real ghetto queen” who now calls the UK home.

“ Champion doesn’t mean that you’re rich, it just means that whatever you do, and you do it to the best that you can, then you’re a champion,” Tina B told The Gleaner.

“If you’re a single mother and you get up and fight every day just to make sure you provide, and you provide, you’re a champion – that’s what the whole thing of Champion is about. I decided to release the video on New Year’s Day to bring in the new year with a good vibe, spirit and energy.”

The singjay immediately heard the word ‘champion’ when production outfit Ajani Music sent her the rhythm. It’s an adjective, she says, people often use to describe her. The 32-year-old is a mother of four who holds down a day job while running her own elderly care business, on top of being in the music industry for almost 13 years.

The feedback to the project is a good indication that she is well on her way.

“A lot of people, especially males, are telling me that too much of the same thing inna the business; too much skin out and too much this and that, which we don’t need … .They are saying, ‘We need strong females like yourself to come into the business and show the world something different, and we’re glad that you’re different.’”

Admittedly surprised by this particular response, Tina B said she remains authentic to her style of creating music, even if she tickles brains by her image. On a recent trip to Jamaica, Tina B said people expected her to have locs, because of the reggae foundation of Champion. It was her first time making a song of that nature, but it was a space where she said, she felt quite comfortable.

Tina B hails from Gully Bank, St Andrew, where she spent her early years before migrating to the UK as a pre-teen. She started her music career in 2009 and has released tunes like Standing Ovation, Struggle and Boss Lady. Juggling her career with her other endeavours has been no easy feat as a mother, but her children are her primary motivation behind her drive.

“The life I lived as a child, where I didn’t know when my next meal was coming, I promised myself that I wouldn’t let my children go through that; so I work day and night and provide, to make sure my children have the best,” she explained.

She recently built a studio at the back of her home, with a section for her children, who range in age from one to 13 years old. They stay with her while she records, and she hopes her work ethic will pave the way for her big break in 2022.

“I speak things in existence, so my aim is to ‘buss’ this year,” she said. “I put it into the universe and now mi just haffi make it manifest, but obviously, mi haffi work towards it fi mek it manifest.”