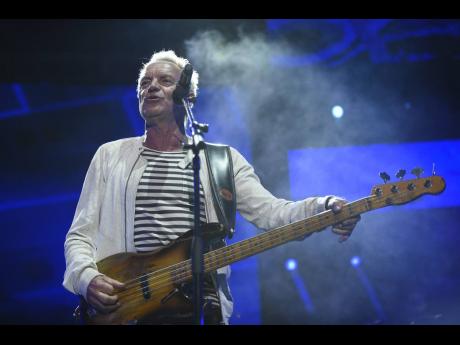 File
International recording artiste, Sting, performing at Shaggy and Friends held on the Lawns of Jamaica House in St Andrew in January 2018.

Sir Paul McCartney has topped the list of Britain and Ireland’s richest musicians.

The 79-year-old star has a personal fortune worth £865 million, which is up £45 million from last year, thanks to his COVID-delayed Got Back tour and The Beatles: Get Back documentary.

Irish rockers U2 are in second place on The Sunday Times Music Rich List, with an overall worth of £625 million, while composer Andrew Lloyd Webber sits in third position with £495 million.

The Cats composer is followed on the list by Sir Elton John, who has seen his fortune increase by £20 million over the last 12 months, meaning he’s now worth £395 million.

The top four places are actually unchanged from 2021. However, 70-year-old musician, Sting, has climbed from ninth to fifth, having earned as much as £100 million over the last year. He is now worth £320 million.

Sting, who, along with Shaggy, won the Grammy for Best Reggae Album Grammy in 2019 for their collaborative album 44/876, had a residency at Caesars Palace in Las Vegas in 2021.

Olivia Harrison, the widow of Beatles icon George Harrison, and their 43-year-old son Dhani Harrison are now worth £295 million, while Sir Ringo Starr’s fortune has been listed at £285 million.

The top ten is rounded out by Ed Sheeran, who is notably younger than the people above him.

The 31-year-old pop star, who is reported to be worth £260 million, has seen his fortune increase by £40 million over the last year, following the release of his fifth studio album.