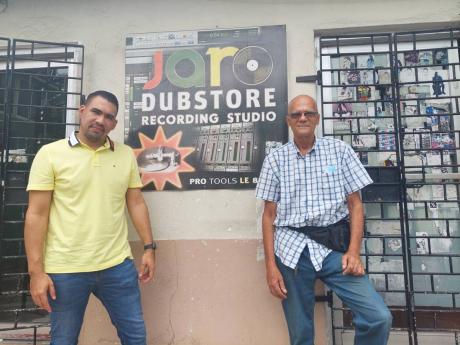 Stephanie Lyew
David Harper (left) is happy to take over the reins of Killamanjaro from his father, Papa Jaro. 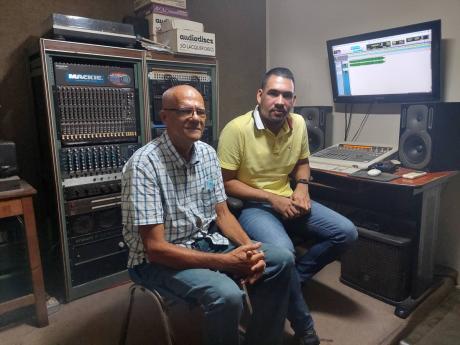 ( It’s Father’s Day in the year of Jamaica 60 and, as part of the jubilee celebrations, The Sunday Gleaner’s Entertainment section is featuring the sound system culture, which was born in Jamaica in the late ‘40s and ‘50s through the creativity of the great pioneers. The work of these sound system fathers has been sustained by a succession of ‘sons’ who continue to “do it for di culture” on a global level).

“I never see myself as a ‘Father of Sound’. I am father for David (and the rest of my children),” quipped Noel ‘Papa Jaro’ Harper, founder of Killamanjaro. The Jamaican sound system, which stamped its name as a producer of classic reggae dubplates and a leading sound system in clash culture since the early 1970s, is still ‘firing’ and Papa Jaro is widely respected as a patriarch in the industry.

“I don’t know if I have any responsibility [to the sound system industry] but all I know is, whatever I do, I am going do it to the best that I can,” Papa Jaro told The Sunday Gleaner, adding that he is “a little concerned about the people who come into the industry” after him.

He noted that there is a lack of attention to details, which is needed to set a good foundation and propel the sound system culture in a lucrative direction.

“I have heard some persons jump into the business say that they regret it, and that ‘if dem did know is so the business did stay, they wouldn’t have pursued it’. It’s not an easy thing and, if you don’t have the love for the music, you not going give the sacrifice it requires.”

Papa Jaro, who was exposed to music in his household, shared that his father was an aficionado and his older brother owned a small sound system. The dream to own a sound system was one he never let go of, even when his peers jeered him. The first piece of equipment he purchased when he graduated high school and started working was an amplifier. He said that, when the business started, it was focused mainly on creating dubplates for the purpose of promoting Jamaica’s reggae and dancehall music and for the use in clashes but, as it became recognised as a leader and with a name like Killamanjaro, other sound systems thought the only way to prove their strength and competence was to “kill the sound in clash”, he said. “It was just a hobby. I didn’t know I could and would end up making money from it, but it is because I was dedicated to it why it has grown into the sound it has become.”

Having watched the sound system culture evolve over the past five decades, he, the Killamanjaro team and his family, have had their fair share of teething troubles but he asserts, “children grow up fast and they see everything you do”.

“There are some dangers in this business and I was kind of protective. I was concerned, too, but I realised David could take care of himself and I stop worrying. The idea is to set a good example for them,” he said. “People want to start things and don’t know how they are going to finish it. Until they put me in the earth, I have a conviction … being a father, you feel like you are responsible for your children and want to protect them 24/7. If you ever feel you can’t do it, you feel helpless. I want to know I can provide for my children as long as I have life.”

His son David, known widely as King David, said that is one thing he can hail his father for, next to the lessons and impressing on him the value of discipline and determination in the field of business.

“Something that we hear all the time is to be disciplined. Aside from the business knowledge, the practical part of operating a sound is where I gained a lot,” King David said.

He added, “I wasn’t forced in it; there was always a love for music and it increased from me just starting to show up at more dances with Dad, again seeing the love for music and the satisfaction we give to people. It was not necessarily a catalyst, but timing that made me get more involved, to develop an interest in learning about the physical aspect of the system, then getting to know the artistes. Just knowledge being intertwined, that made me know where I was headed.”

Killamanjaro has been designed efficiently as a mobile sound system and is very popular on the rural scene and internationally.