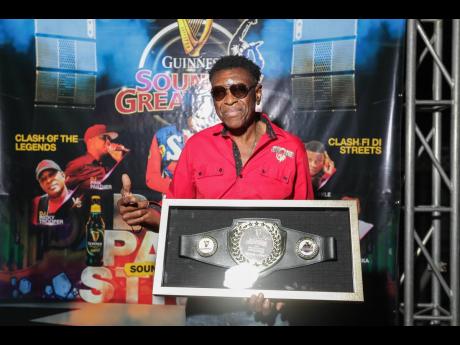 After more than five decades in the business and numerous awards and accolades, veteran sound system operator Winston ‘Wee Pow’ Powell is still humbled by the recognition of and appreciation for the Stone Love legacy. Wee Pow reflected on the Stony Love journey after its most recent award by Guinness Sounds of Greatness (GSOG), describing the last 50 years as life-changing and revolutionary not just for him and his organisation, but also for countless fans and sound system aficionados here and abroad.

“It mek mi feel good still. It mek mi feel motivated, like I want to continue the journey to another 50 or more,” he said. “We’re coming from far. After all these years, Stone Love is still making waves.”

Wee Pow recalled the early days, motivated by a desire to start his own business and powered by a passion for dancehall sound systems. Though he was involved in electrical work as a young adult, the urge to follow his dream did not let up until he took the leap. Living on Molynes Road in Kingston back in 1972, considered Stone Love’s birthplace, Wee Pow first got his hands on a small set of stereo components meant for home use. He immediately began thinking about how he could expand it with support for his vision from those around him. “My coworker Winston Rhooms helped me buy a larger amplifier, and my cousin, Charles Reid, a cabinetmaker, helped to build speaker boxes for a bigger set,” explained Wee Pow, adding that he learned what he needed to know by observing others with an added boost from his electrical training.

Today, Stone Love has a larger team, more advanced equipment and has performed in top cities in Europe, Asia, Canada, and across the Caribbean. Meanwhile, Wee Pow is still very hands-on, playing a major role in each aspect of the business.

As brands like Guinness continue to recognise the contributions of sound systems to the dancehall culture, Wee Pow hopes that up-and-coming sound systems will be encouraged to develop a genuine love for what they do as this, he said, will ultimately ensure their preservation throughout generations.

“You have to have that passion for the music, the business and the culture. We’ve seen so many changes over the years. Many sound systems come and go. But those that remain are the ones that take it serious. It’s not just a hype ting. It’s real love,” Wee Pow asserted.