Women and the Jamaican Political Process - Part II: A New Framework for Politics - The First Candidates and Elected Representatives 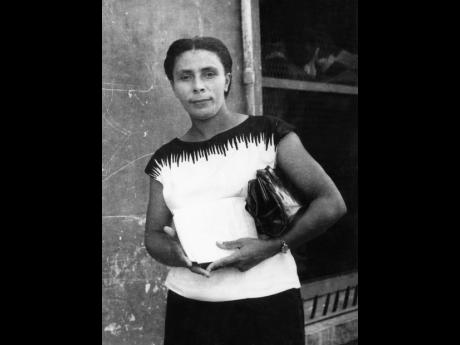 Iris Collins, who in 1944, became the first elected female member of the House of Representatives.

In the period between the launch of the first islandwide trade union in 1936 and the granting of Universal Adult Suffrage in 1944, a new framework for the Jamaican political process was created.

However, the historiography of the period has focused almost exclusively on the contribution of two men – Norman Manley and Alexander Bustamante.

The contribution of women in this period, and in particular the roles played by Edna Manley and Gladys Longbridge, remain under-studied and under-documented. Yet both, by their sustained support and critical thinking, underpinned the success of the two men who became national heroes.

Longbridge (1912-2009) was born in the rural community of Ashton in the parish of Westmoreland. She was a 24-year-old graduate of the Tutorial Secondary & Commercial College when she became Bustamante’s secretary.

Over the next 42 years, she would become his anchor, his confidante, his wife and the foundation of his success. As Bustamante himself conceded, “I owe all my success to her”.

Her first area of involvement was in Bustamante’s letter-writing campaign, which brought him to public attention and confirmed him in his self-appointed role of “public defender”.

During the 1938 labour rebellion, Longbridge was beside him every step of the way, supporting his fearless leadership of the workers.

When Bustamante was interned between September 1940 and February 1942, her role as the anchor kept the Bustamante Industrial Trade Union (BITU) alive.

Edna Manley, the wife of Norman Manley, revolutionised the cultural landscape and imbued African-Jamaicans with a sense of worth and racial pride with her art.

Her carving of Negro Aroused in 1935 “epitomised the awakening of the Negro ... to a vision of a new Jerusalem”. She was a member of the editorial board of Public Opinion, the change”.

When the labour rebellion broke in 1938, her unerring political instinct led her to recognise the moment had arrived for Norman to take the national stage.

Norman was in Frome holding a watching brief for the sugar company, Tate & Lyle, when she sent him a telegram, informing him that “all hell had broken loose in the capital city” and that his presence was urgently needed. Norman drove to Kingston that same night. As he recalled after touring the streets of Kingston the next day: “That night my wife and I sat late into the night ... discussed the situation ... and I understood that I had entered a new role and would walk it wherever it led”.

Edna Manley walked every step of that road with him.

During the rebellion, Edna Manley enhanced the political capital of her husband by forging a partnership with Aggie Bernard, a black woman of the people, to provide meals daily for the workers on strike on the Kingston waterfront.

The new framework for politics which emerged was established by the three fundamental institutions established in the period – the Bustamante Industrial Trade Union and two new mass political parties, the People’s National Party (PNP) in 1938 and the Jamaica Labour Party (JLP) in 1943.

This new framework was embodied in the new constitution of 1944, which granted Universal Adult Suffrage. As a result, some 663,069 voters were on the voter’s list for the elections of December 14th, 1944 to elect 32 members of the House of Representatives. The 130 candidates included 29 from the JLP led by Alexander Bustamante; 19 from the PNP led by Norman Manley; 9 from the Jamaica Democratic Party (JDP)  and 5 from a number of small parties. The remaining 68 candidates were all independents. Of the 130 candidates fielded, only three were women – Mary Morris-Knibb, Edith Dalton-James and Iris Collins.

Mary Morris-Knibb was an outstanding educator and social worker. She was founder and principal of Morris Knibb Preparatory School; President of the Kingston Teachers’ Association; President and co-founder of the Jamaica Women’s Liberal Club and vice-president of the Jamaica Federation of Women. She had been elected to the Kingston and St Andrew Corporation in 1939 and now stood as an independent candidate in the constituency of St Andrew Eastern.

The seat was won by the JLP’s Edward Fagan with 5,263 votes with Norman Manley was runner-up, earning 4,858. Gerald Mair, the former PNP treasurer also ran as an Independent splitting the PNP support with his 3,135 votes. Morris-Knibb only managed to get 269 votes.

Dalton-James, a founding member of the PNP, was the Party’s candidate for the St Andrew Western constituency.

After graduating from Shortwood Teachers’ College, she began her teaching career at Unity in the hills of St Andrew where she and her husband, Spencer Wesley James, were recognised for their outstanding work, both in the classroom, as well as the community. The couple next moved on to Half-Way Tree Primary School, which they made a centre of both quality education and for social welfare activities. The seat was won by the JLP’s Dudley Evans with 6,421 votes. Dalton-James was the runner-up with 3,712, finishing ahead of the JDP’s E.E. McLaughlin with 2,131 and Independent Arthur P. Hanson with 333 votes.

Twenty-nine-year-old Iris Collins, a businesswoman, farmer and “ardent community worker” was the youngest candidate in the elections.

In 1939, she was elected a member of the St James Parochial Board. Selected to represent the JLP in the constituency of North Western St James, she made history, finishing first against a field that included the pioneer trade unionist, A.G.S. Coombs, leading Montego Bay businessman, Walter Fletcher, who ran for the JDP, and three Independents – Charles Agate, William Green-Spence and Howard Gosset.

This landmark victory made Iris Collins Jamaica’s first elected female member of the House of Representatives. All of the 12 nominated members of the Legislative Council were men.

In the 1949 General Elections, only three women were among the 114 candidates. Morris-Knibb did not offer herself again as a candidate. Collins failed to keep her seat, losing to A.G.S. Coombs who ran for the PNP.

THE RISE OF AGATHA ROSE LEON

Born in Alexandria in the parish of St Ann, Rose Leon was a graduate of Wolmer’s Girls’ School and the Abyssinian School of Cosmetic Chemistry in the United States of America. Her political career began as a member of the Kingston and St Andrew Corporation (1939-1947) and in 1948 she was elected Chairman of the Jamaica Labour Party. Rose Leon was on her way to becoming one of Jamaica’s most colourful and enduring politicians even before entering the House of Representatives in 1949.