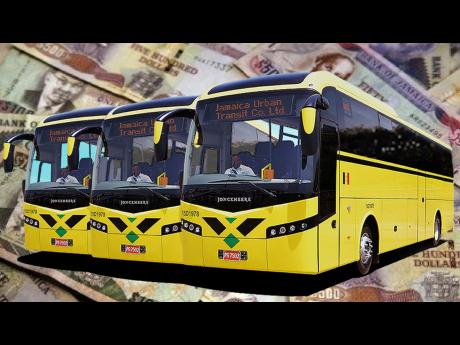 Questions about why the Jamaica Urban Transit Company (JUTC) has been losing billions yearly confounds the average man. How can an organisation with a near monopoly still manage to lose? The Gleaner asked this question again this week. Let's hope the answers it comes up with don't fall on deaf ears.

For its financial year beginning in April, the Jamaica Urban Transit Company (JUTC) expects to lose over J$5.6 billion. That’s not the real figure. The reality is nearly twice that amount, which the government-owned company will mask with sleight-of-hand accounting, as it does every year.

First, by the JUTC’s projection, it will post an operating loss of J$8.82 billion, meaning that its income of J$2.64 billion will cover only approximately 23 per cent of its operating cost of J$11.47 billion. That is not all. The company will have another J$2.1 billion of financing and depreciation charges, bringing the total loss to approximately J$11 billion.

Here is where taxpayers, if they are not alert, get bamboozled. Nigel Clarke, the finance minister, on their behalf, will give the JUTC J$5.34 billion in grants. So, in the finance ministry’s document on the expected financial performance of prescribed public-sector entities, the JUTC says it will post a loss of J$5.6 billion, adding to the company’s accumulated deficit of $29.8 billion.

If the JUTC was wound up now, its shareholders, Jamaica’s taxpayers, would have a negative interest in the form of J$4.9 billion in the company. That is the amount by which the company’s assets and shareholders’ funds are outstripped by its liabilities. Looked at another way, if the JUTC were not a government firm, which could run up massive annual deficits while hitting taxpayers for subsidies, it would have long been an insolvent company and out of business.

This, of course, is not new of the JUTC. It has recorded big losses for most of its 23 years of existence, across political administrations. In the 2020-21 fiscal year, for example, for which it claimed a surplus of J$1.23 billion, the JUTC had a grant of the same amount that it expects this year. Without that grant, its deficit would be over J$5 billion. And even that is not the whole picture. The company had J$4.42 billion in interest and penalty write-offs – presumably from the Government and its institutions – which counted as revenue, thus pushing its income for the year to J$6.1 billion, rather than J$1.65 billion.

We highlight these issues neither out of malice nor a stance against the Government being in the public transportation business. Efficient public transportation is important to modern economies. Around the world, especially in major commercial/economic centres, governments often subsidise mass transit systems so as to facilitate the fast, efficient and affordable movement of workers and other commuters. That is good for economic and social stability and productivity.

However, when enterprises get huge gobs of taxpayers’ money, we expect them to be productive, performance-driven and accountable. Unhappily, we cannot claim to be impressed with the JUTC on any of these counts. Neither can we make that argument for those charged with protecting taxpayers’ interest.

More than a half a year ago, Jamaica’s auditor general published a performance review of the JUTC. It suggested an organisation that was incompetently managed, with apparent little care for the fact that it stayed afloat only because the national treasury was well disposed to it.

For example, over a five-year period, it hired 500 people for whom positions were not approved, and for whose salaries taxpayers had to foot a bill of over J$1 billion. Yet, the auditor general discerned no effort by the JUTC to use those extra jobs to “leverage operational gains” for the company. Instead, the review found that while the company’s employee-to-bus ratio was higher than its established standards, it paid out J$1.74 billion for overtime work, which was 72 per cent above budget. Further, people were placed in positions for which they were neither hired nor competent, then were quickly promoted at higher salaries, without an obviously logical basis for doing so.

The auditor general also found, among other things:– A lax inventory system;

– Seemingly weak analysis before the decision to purchase buses, which proved unsuitable for the terrain;

– The use of supplier’s agent to service vehicles when the JUTC’s own staff were to be trained for the job; and

– A failure to place its petrol supply contract to public tender, thereby striving for the best deal, rather than locking itself into a single supplier.

These were expensive and egregious management failures, to which the company offered either flaccid rebuttals or claimed that they were being addressed. It has offered no clear evidence or independent review of its actions. Moreover, the auditor general’s report notwithstanding, most of the same managers and directors remain at the JUTC. And from this newspaper’s report on the JUTC on Sunday, it appears that the problems observed by the auditor general, by and large, still persist.

We therefore repeat our suggestion for a forensic audit of the JUTC, as well as a deeper analysis of its operations as part of a medium-term plan for a modern mass transit system for the Kingston Metropolitan Area and the rest of Jamaica. This would be in keeping, we think, with the urban renewal mandate that was given to the housing and environment minister, Pearnel Charles Jr, when he got the job last September.