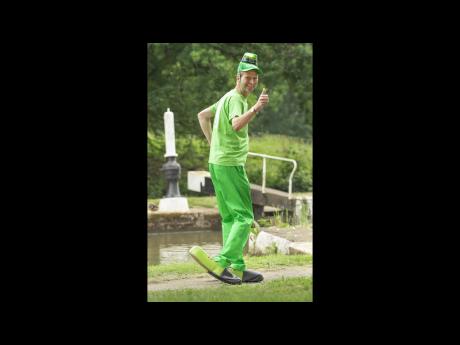 A man is walking backwards for 100 miles for his latest "wacky" fundraising challenge.

Stuart Kettell is following the Grand Union Canal from Northampton to Central London in aid of Macmillan Cancer Support.

Kettell will use backwards-facing shoes to aid him in his challenge along with sporting dyed green hair in honour of the charity's logo. His outfit also includes a loudspeaker announcing that he is in reverse.

Kettell said: "You’re using muscles that you don’t usually use, and the body isn’t used to walking backwards."

He has raised almost £60,000 for the charity by completing strange challenges over the past 14 years, such as pushing a Brussels sprout up Mount Snowdon with his nose.

Kettell will be joined on his trek by Norman Wooley, who will captain the narrowboat that he will sleep in during his journey.