Kelly's World | How one country so lucky/blessed? 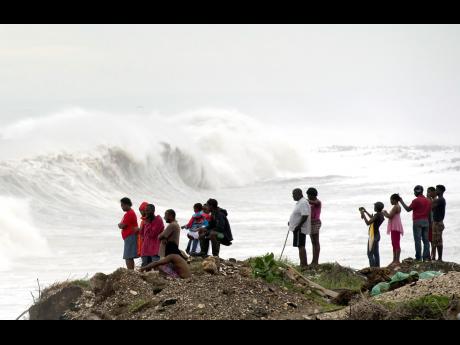 AP
People stand on the coast watching the surf produced by Hurricane Matthew on the outskirts of Kingston, Jamaica, last Monday.

Well, Matthew turned out to be like one of those men who talk a good talk but can't mash ants.

St Thomas, and Portland. Now, while he did give us some precipitation and breeze, for the most part, he kept us free of death and destruction. And for that we are grateful. To be honest, we really couldn't take a direct beating from the goodly Matthew. But the point is, whether it be the hands of a supreme being or just dumb luck (whichever theory you subscribe to) Jamaica has been spared, again!

I'm beginning to wonder just why we've been able to dodge so many of these major hurricanes over the past few years. I know that Ivan and Dean did damage, and the people who lost everything or almost everything would surely disagree. But compared to the widespread damage that occurred after Hurricane Gilbert, Jamaica has really been spared more than a few times since then. Now, the optimistic side of me looks at the situation and says "no weh nuh betta dan yaad". And it reminds me of why I'm not in a rush to run to foreign countries to die of hypothermia and frostbite. You ever hear about the monsoon rains in Asian countries? Whe rain a go? No sah, Jamaica to di world!

But at the same time, the pessimistic side of me (which is admittedly the greater part) is just wondering how many more times we're going to dodge bullets (or hurricanes) before we literally clean up our act. On Sunday, the outer bands of Matthew (he was a big old boy) lashed the Corporate Area with steady rain for about 30 minutes or less. Did you see the amount of water along sections of Hagley Park Road? Better yet, before we even heard of Matthew, rains turned Marcus Garvey Drive into the Rio Cobre. My point is, our drainage infrastructure and garbage dumping need vast improvement.

THE STAR newspaper headline last Tuesday (when it was pretty certain by then that Matthew really never out fi bodda wid we) was that 'Prayer turned Matthew away'. The subheadline said pleas for mercy kept us from the might of Matthew. That's probably true, but here's the issue with that theory - How many times di Good Lord gwine ansa our call so? If there's the belief that we're an evil people (lotto scamming, domestic violence, being unkind to each other, etc) and that natural disasters are one way we're punished, just how much more grace do we expect the Big Man Upstairs to have for us?

Perhaps if we spent more time trying to be better citizens (caring for each other, not supporting criminals and criminality, taking care of our environment, etc), maybe we wouldn't have to be fretting every time a weather system look our way. But then, some Jamaicans are lazy so maybe that's the easier thing to do. Sigh, dem lucky. Till di next time.