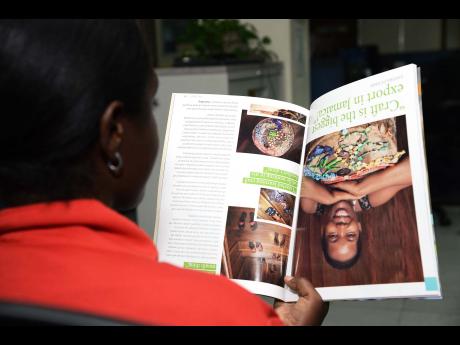 Growing up, I remember a song that said reading maketh a full man, so read and read all you can.

Reading does introduce you to many things and can make you more well-rounded. So it's a little (OK, more than a little) messed up that so many Jamaicans don't read. And when I say read, I don't mean they don't peruse the newspapers or the encyclopaedia (dem still print that?). I mean they don't read even the simplest things.

A few practical examples. There is an ATM machine I use, and for about two weeks it was undergoing some form of repair or upgrading - can't remember which. Anyway, the bank put a sign on the door explaining the ATM would be out of use for a while. I saw persons walk up to the machine, look inside to see if there was anyone in there and then proceed to swipe their card to enter.

Note, the sign is on the same piece of glass they looked through to see if there was someone inside. It's only when they get inside the machine that the 'revelation' come. But OK, maybe they didn't see the sign to read it. Not sure how, but OK, that's fine.

Back when I used to do the Children's Own Spelling Bee parish finals, I remember we pulled into one of the parishes only to hear teachers complaining they didn't know the final was that day. How come? Because they didn't receive any letter. Hmm, considering the dates and schedule for the parish finals were printed in the Gleaner, Star, and Children's Own newspapers, I'm not sure how they missed it.

Trust me, Jamaicans don't read. By extension, they don't listen either. How many times have we heard notices on the radio or television regarding road closures, and the subsequent detours, only to still see scores of drivers scratching their heads when they come to the 'surprise'? Just last week, the work taking place in the East and North Street areas of downtown Kingston had persons befuddled. Except the relevant authorities put the notification days ahead of time in print, on radio and online. The other day, there was a giveaway for a popular party. The public was asked to call between certain hours to try and win tickets. So, obviously, some people called like four hours before.

I've come to realise that people are quick to read about and pick up on the things that interest them. So dem wi religiously read 'bout Kanye West and him wife, or about him wife sista dem, but can't tell you if their pickney get homework ah evening time. If these grown people have to go to the library or a government office to find something, they get frustrated after five minutes. But they will spend hours on Facebook trying to find a video of high schoolers behaving badly.

They know everybody's business, except the business that directly affects them. I would worry about whether they might find some of these comments offensive, but then again, pretty certain they ain't reading.