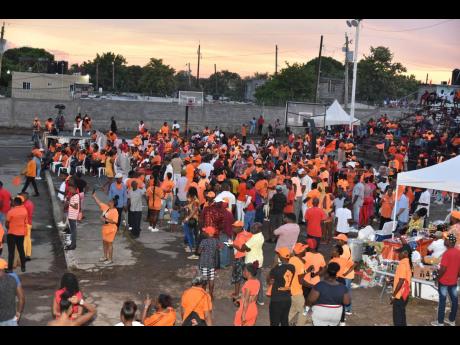 Political parties enjoy their best times when they win governmental power. They also can afford to accept the accolades from the media and those in other influential sectors of the country who find it convenient to shower them with praises. At...

Political parties enjoy their best times when they win governmental power. They also can afford to accept the accolades from the media and those in other influential sectors of the country who find it convenient to shower them with praises.

At minutes to midnight on that fateful Election Day, the losing party goes into mourning. Outside of the earshot of the public the orchestra readies itself as accompaniment as the weeping, wailing, and gnashing of teeth in the losing party play out.

Many months before the principals of the RJRGLEANER-commissioned Don Anderson poll and the Nationwide Bluedot poll had tabulated their findings of the recent polls they did, many people, including me, could tell that the opposition People’s National Party (PNP) was in the doldrums.

In most of the concerns that many likely voters and non-voters would have as items that were troubling to them, the PNP was just never seen as a party that could solve those problems.

While Mark Golding and the PNP were tolerated by the electorate as a necessary part of the political noise that existed, many who were prepared to vote saw the Jamaica Labour Party (JLP), and especially Andrew Holness, as the forces that had true relevance in Jamaica’s political affairs.

One of the most destructive political viewpoints held by many in Jamaican society was the accepted position that Jamaica was heading into one-party rule simply because the opposition PNP was stalled in the water with no wind to blow on its sails.

In other words, the JLP was seen as the only game in town, and it appeared that the people had forged a relationship between Andrew Holness, the JLP, and voters to enjoy an extended friendship for many years.

It has to be extremely painful for the PNP and its leader-in-peril to accept that in 2022, they may be headed to the same place of political torpor and irrelevance that existed when Peter Phillips had convinced himself that a last-lick life was inside him.

The political polls have told a hapless Mark Golding and the rest of the PNP pushing the broken-down car up the hill that it is time to stop pushing. It is pointless and plainly embarrassing.

So what are the options available to the PNP? The first is this one. Bear it out and hope that in the corruption raffle something happens this year or the next or the next to tear away at the fabric of the JLP administration and hope that it sticks.

Or go to the want ads. Needed. Attractive man or woman with facial strength and bodily swag from the political podium. Age between 54 and 62. Bright and steeped in Michael Manleyism. Must be prepared for a professional life of boredom.

I have always known that former Security Minister and Transport Minister Robert ‘Bobby’ Montague was always a part of the real innards of the JLP.

In his recent pronouncement from Parliament in his state of constituency he unloaded on items that have long needed to be broadcast from a mouth as fearless and unchained as his.

He told us in strident terms that banks in Jamaica were acting as if they had been given special privileges in interacting with their customers. Almost as if we were in hock to them, the big bosses.

It rang true when he declared that authorities were off the mark in dealing with small transport operators with impunity while seeing banks as special, endangered species that deserved protection. The banks were free to dole out their range of disservices to customers who had seemingly no meaningful response to the power wielded by the banks.

The man who used to be a minister and just happens to still be chairman of the JLP needs to be back in the Cabinet.

QUEEN DIES AND WE MOURN MORE THAN HER PEOPLE

I could always separate my liking of the perceived warmth of Elizabeth who called herself Queen and got the rest of us to fall in line from what the monarchy represented: asiling ships down to the West African coast, the brutal capturing of Africans and transporting them to the Americas and the Caribbean.

And on the voyage, treating them worse than cattle. And in the entire experience our women were raped, and all our people were debased and beaten and dealt generations of horror while we made Britain into the economic powerhouse it became.

And horror of horrors! At the time of the death of Elizabeth II we are called on to mourn her death. Are we serious?

I would not suggest that we launch a big dancehall celebration of a demise that is just there, waiting on all of us. But it is a little too much - in fact, a lot too much - to mourn the death of a monarch whose entity solidified not only the power it enjoyed in its days of empire but was also noted for the horrible days and nights and centuries that it brutalised those of us who are now expected to mourn something that we cannot feel.

Many heads of school boards and older principals are more in line with ‘authority’ as they see it in the Bible as opposed to a few children expressing themselves.

Don’t get me wrong now. Boys being turned away from school because their trousers are deemed too close fitting or girls being sanctioned for skirts too short are, to me, the results of school leaders living in the past and believing that godly authority has empowered them to act out religious idiocy.

I can understand a school principal hitting out against a child with a tattoo on his or her forehead.

We need less of the ethical police and more of those in the business of delivering the joy of learning to our youngsters.