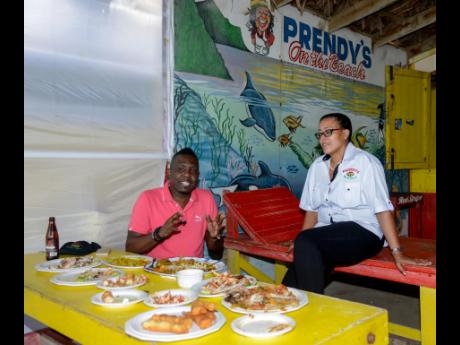 André Lowe chats with owner of Prendy's on the Beach, Donnette Prendergast, over his spread of delectable seafood dishes. 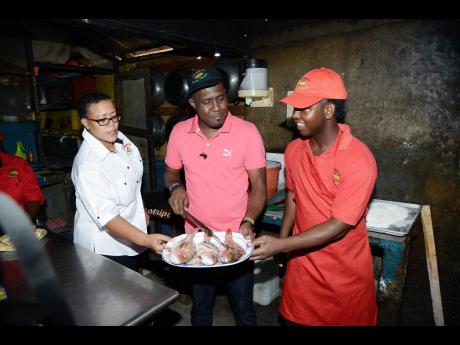 Wait a minute? You two (Donnette Prendergast and McGyver) don't trust me to do this right? 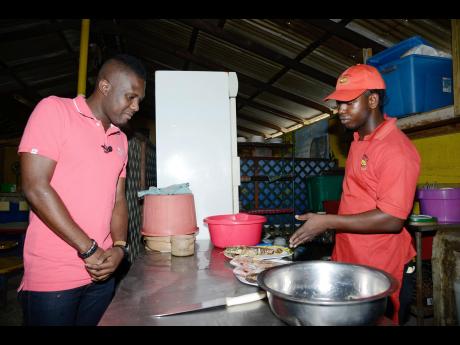 André Lowe pays keen attention to McGyver as he chooses the fish to be prepared. 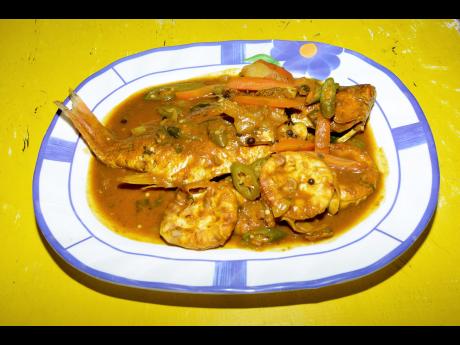 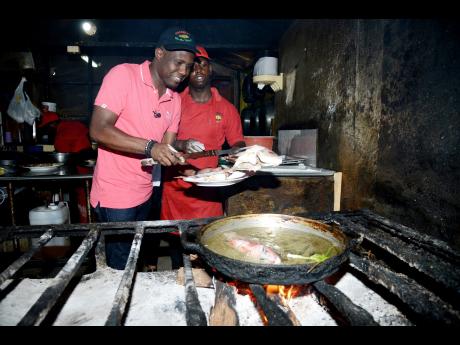 Applying what he learned earlier, André Lowe, under McGyver's watchful eye, puts the fish in the frying pan. 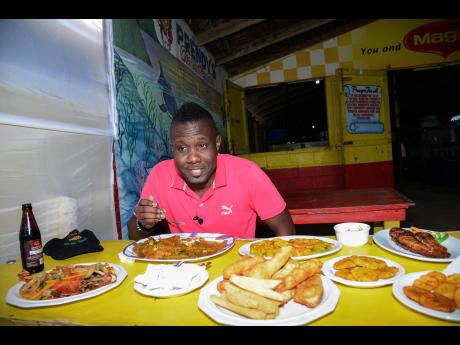 What will I do with all this food? 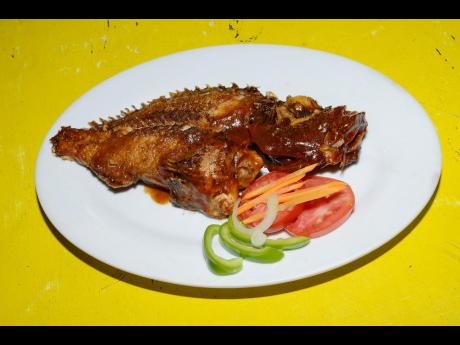 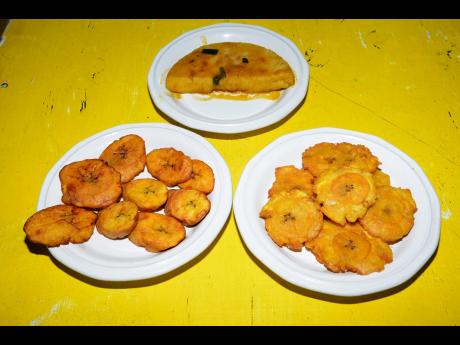 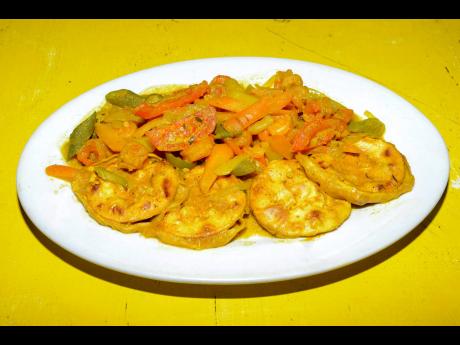 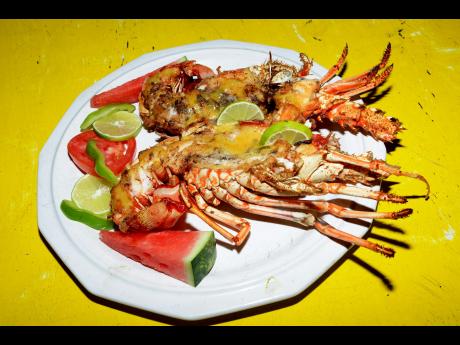 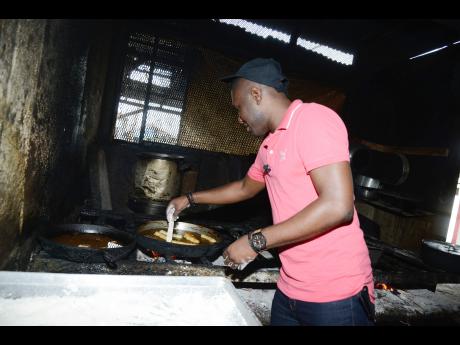 André Lowe proves his cooking skills with the careful palcement of the festivals. 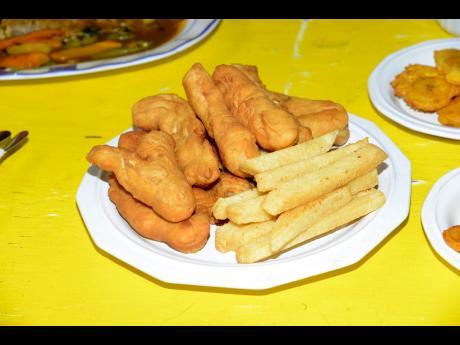 Seafood on the beach is never complete without fried festivals and bammy. 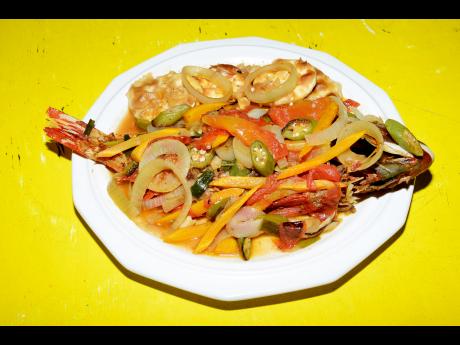 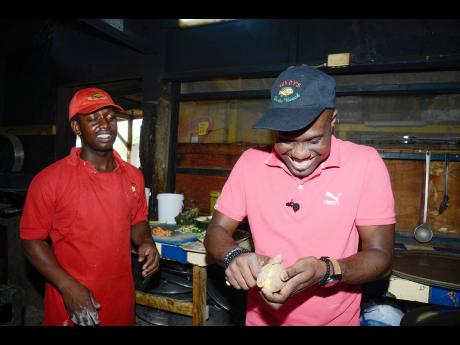 McGyver had a warm time teaching rookie chef André Lowe how to peel a potato. 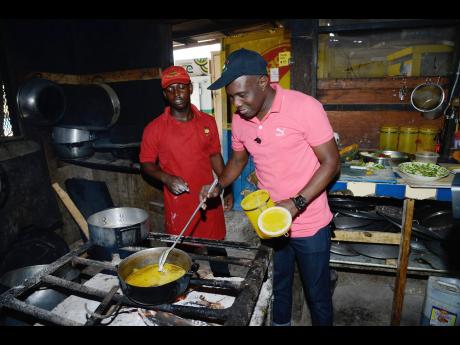 The rhythmic harmony of waves crashing against the shoreline and a hearty breeze is likely to meet you everytime you step into the rustic, open-air setting at Hellshire's seafood staple Prendy's on the Beach.

Still, nothing is more welcoming than the mile-wide smile that owner and operator Donnette Prendergast serves to everyone who walks through the yellow-canopied entrance of one of the island's most popular eateries.

Prendergast's broad beam, true to form, was there to meet The Gleaner's Eat Around Jamaica team as we navigated our way to St Catherine's gem, through tightly packed shops and huts, as well as eager tradesmen selling everything from ornamented pieces of bamboo to hand-crafted necklaces.

There's nothing posh or pretentious about this place. What it does however, boast, is a rich character and authentic charm - oh, and of course, some of the best seafood you'll experience anywhere. Attacking the nostrils almost immediately, a tangy combo of herbs, spices and fish reeled us in like the day's fresh catch, which was waiting to be devoured. It was an opportunity to enjoy real Jamaican food and experience the little things that make Prendy's the staple that it has become.

It was also a chance to step into the small kitchen, which itself is being renovated as part of a major project, one Prendergast expects will decrease the waiting period for meals without compromising the quality.

"We are expanding the kitchen to accommodate a freer flow and getting the food out on a quicker basis. Sometimes, the wait can be a little long, but we don't compromise the quality of our food," Prendergast underlined during a brief tour of her restaurant.

And to think that Jamaica's most popular seafood spot started out as a once-a-week cook-up in nearby Dunbeholden.

"We didn't know Prendy's would have grown out of that. I am moved to tears speaking about it. It's a dream that came to fulfillment - fruition yes, but fulfillment and it will only get better," gushed Prendergast, smiling.

It's a reflection of the passion, present in wanton amounts in every dish that leaves the Prendy's kitchen, as I would find out myself. Foundation chef McGyver offered a crash course in festival making, Nekita Hinds was a busybody in the kitchen, while McGyver proved that just like the '80s TV character with the same name, he was quite handy, as he took me through the process with coconut-curried shrimp, fried lobster; fried, brown-stewed and steamed fish - all prepared with natural ingredients and with the restaurant's signature style, presented as the crew's offering.

Just as appealing were the sides - festivals and pressed green plantains - to accompany the main dishes. But first, it all had to be prepared and cooked, and that's where I came in!

I started slowly, perhaps nervous at the challenge of meeting the high Prendy's standards. I'm certainly comfortable in front of a stove, but ... well, let's just say I'm obviously no Lumley.

But just like that, viola! Fresh palm-rolled dough was transformed into almost perfectly formed festivals. A carnival of boiled then blended pumpkin mixed with fresh steamed vegetables blanketed naturally seasoned fish. I had become a mini-Boyardee, flipping, stirring, tasting, mixing. It went well, with the exception of a V-shaped festival. I don't know how that happened. Cooking ... OK, helping to cook the meal was a treat, but not even a first-hand look at the meticulous preparation and pride that goes into the process could prepare me for the next part of our trip.

Heavenly! Rich, succulent goodness melted in our mouths as we enjoyed the spread. It was gastronomic bliss with a well-seasoned and fried lobster, three choices of fish, all done to perfection, coconut fried shrimp, festivals and a cold Dragon Stout bringing a tasty end to an amazing day.

We'll be seeing you soon, Donnette!