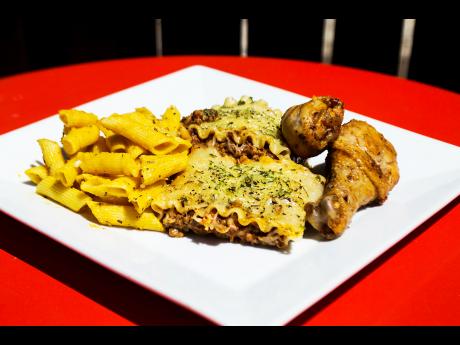 There is more to cooking than just frying, grilling, stirring and seasoning. It is an artistic expression that gets all your senses involves, the eyes with colour, the hands with creating, smell from the sweet aroma, and most of all taste. Traipse was created to satisfy these senses.

Traipse started out as a 'foodie' page for Kaheem Gooden and Julian Walker to write about their experiences with food from different nationalities, restaurants or any spot where their palates were stimulated. But soon enough all that changed as both grew tired with just writing about food and readers getting frustrated with not being able to take part in these mouthwatering endea-vours. They decided to start a pop-up kitchen. Their first was August 2017.

Gooden and Walker are self-taught cooks who became friends during their tenure at Wolmer's Boys School and later became business partners, They were inspired by cooking shows, online recipes, and mentored by Chef Latoya Panton.

"At 21, we're fusing our passion for food with entrepreneurship; looking to bring fresh ideas and quality food to the culinary landscape," Gooden tells Food.

The two opted for doing a pop-up kitchen instead of a restaurant as it allowed for more creative freedom. The young men would get to explore preparation of different cuisines and not be held to a stable menu, as it would be if they were an established restaurant.

They have opted for exploring foods from other countries. Their first two pop-up were Italian food, and this Saturday, March 24, they will be preparing Mexican cuisine. They wanted to just bring another flavour to the Jamaican experience.

"Mexican cuisine makes use of a lot of fresh ingredients and bold and vibrant flavours. We did Italian and creole before and we thought of Mexican as the most obvious choice of what to do next, as not only is it popular cuisine, but we love it. As much as we love Jamaican cuisine, we will always have it because we are here, and variety is the spice of life," Gooden told Food.

However, if there was a favourite food to prepare, this would be more of a difficult choice and in the Italian category.

"This is a really hard question because we have differing opinions on this. It's a split between home-made pizza and pasta with a basil pesto," Gooden admitted.

As it pertains to the pop-up kitchen, they host one every three months and plan to hold true to the pop-up idea and having one in different locations. This will help them to share their love with everyone because, for Gooden, there is nothing like seeing the smile on a customer's face after the first bite.

Their main aim is to continue to grow their customer base and share the love of food with everyone they come in contact with.

Traipse next pop-up kitchen will be held March 24, at 17 Holborn Road, New Kingston.