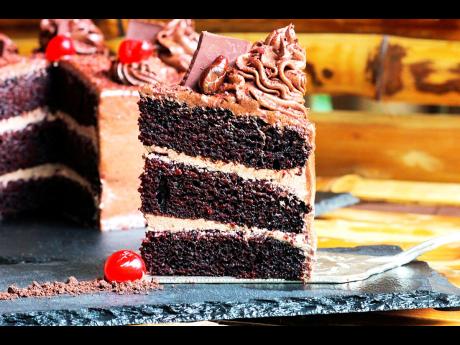 Contributed
No matter what the problem is, chocolate cake is always the answer. 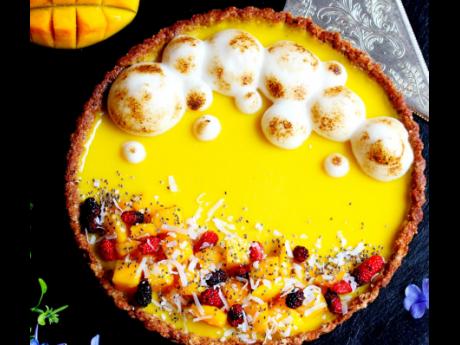 Contributed
This mango passion tart will definitely lift your spirits. 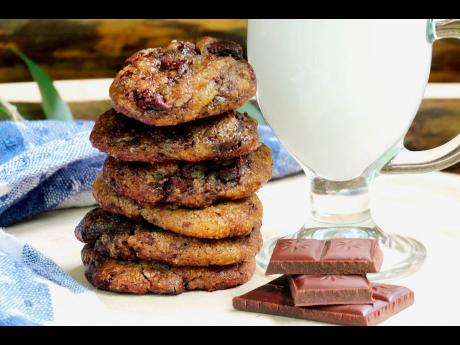 Contributed
A warm stack of chocolate chip cookies is a welcome treat. 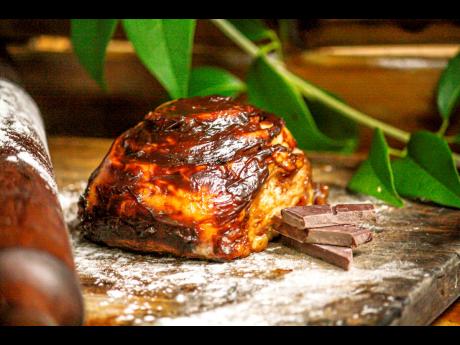 Picture the refreshing taste of fabulous key lime and mango passion tarts, yummy chocolate cake, freshly baked banana bread, and wholesome chocolate chip cookies and cinnamon rolls — all vegan. “They are flavourful, with great presentation, and are actually quite addictive. You take one bite, then another, and all of a sudden, the dessert you bought for your family of eight is finished,” explained Cardolisa Wray, owner and pastry mastermind behind the dessert company, Vegan to Rahtid.

Never in her wildest dreams did Wray imagine that after completing a business degree at The University of the West Indies, she would become a baker. She was looking to charge her way into the corporate world, but decided to venture into desserts. She credits this move — not one made of her own accord — as one in direct response to God. “The Lord told me to bake, specifically vegan desserts,” she told Food.

The entrepreneur admits that a large number of her family members are actually vegan, and they would often have a difficult time finding vegan desserts that tasted amazing. “It truly aligned perfectly, because the pandemic hit and the job market was affected, but I was able to spend the entirety of 2020 testing and perfecting recipes for this moment right here,” said Wray.

Wray isn’t actually vegan. And many are shocked when they discover this. She has experience with being vegan in the past, but she ultimately believed that being non-vegan has its advantages. “I am able to prepare vegan desserts that closely match or even taste better than its non-vegan counterpart. I know from being around the vegan community for most of my life (my family are Rastafarians) that many vegans want to enjoy desserts that are not compromised in taste, just like everyone else. No matter what your dietary restrictions are, everyone has a bit of a sweet tooth, and are just looking for a good dessert to enjoy,” she added.

Although she made treats leading up to her launch in December, she started out officially with a vegan Christmas cake. The desserts were sampled by vegans and non-vegans alike before hitting the market. “I [launch] my vegan dessert box [today] , which I will deliver islandwide. In a box, customers can order cookies, cakes, cinnamon rolls, raw vegan desserts, etc, from an ever-expanding and changing menu,” she said.

It was through feedback and encouragement that the business name Vegan to Rahtid was born. The name is twofold: it encapsulates the shock and excitement expressed by first-time indulgers, who are told only after that the dessert is, in fact, vegan. “This led to the tagline, ‘Rahtid! Dis vegan?!’” She continued by stating that it holds cultural significance to the local dialect, which she hopes will pay off in international markets.

Wray caters to dietary restrictions by choice, ones made for health reasons, or for those who just love desserts. She even satisfies customers who are allergic to animal products, gluten and soy; and she is open to dialogue about how to make her menu more inclusive. “The desserts are dairy-free and aren’t made with eggs, either. I don’t believe in providing low-quality desserts just to earn from it. My desserts are diverse; there is literally something for everyone.”

The dessert maker hopes to expand and is having discussions with cafés around the island about including or expanding their vegan dessert menu. That way, her desserts can fill that gap. It is her ultimate aim to open a vegan café chain, catering to ‘yaad’ and abroad.