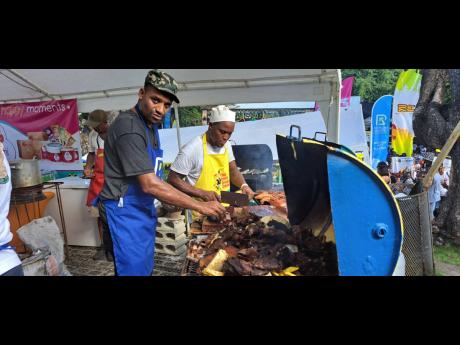 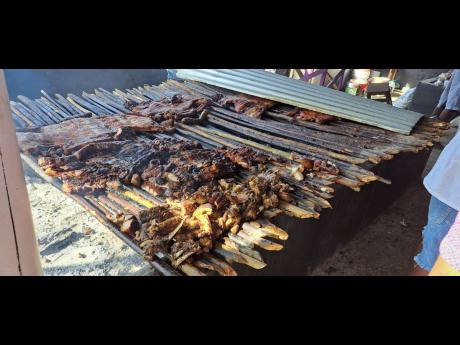 Gareth Davis Snr
Wild hog is jerked over slats of wood at the Boston Jerk Festival.
1
2

It was a day of celebration of art, culture and food at the Boston Jerk Festival held at Boston Beach in East Portland on Sunday, as patrons crammed into the venue to enjoy the various meals on offer.

With the scorching sun upping temperatures, locals and visitors to the annual festival rehydrated with a large amount of bottled water and coconut water while sampling jerk delicacies sold by vendors. But probably one of the rare offerings was that of oysters, which was consumed in large proportion, especially by women, who developed a particular craving for the unique shell food, adding a specially prepared sauce.

“I have always been coming to Boston in Portland, as I feel safe coming here, and the food is always great. I love oysters, and it is a favourite of mine,” said Kaydene Yen-Crawford, a visitor from Kingston.

She added: “Portland is very safe, and the people are friendly too, and the food that is prepared is of the highest standard, and I really appreciate it. The hospitality is great, and we need to take charge of our culture and try and do what this community is doing. The local and small people are doing a wonderful job with the food they prepare; whether it is jerked pork, jerked chicken, rice and peas, or oysters, it is well done.”

“If I can eat like this every day, then I will be alright, “said Michael Deans, a visitor from Spanish Town in St Catherine, who was also seen eating jerk pork and drinking a beer.

“Mi caan do wid out mi pork and it haffi pepper. Mi love Boston pork, and it a di best inna di world. Mi just a eat and enjoy myself, because life is short and before long all a wi gone. Life is just for living, and I am doing just that. Remember, in heaven there is no beer, so mi haffi drink it down here. Di sun hot, but di beer cold so everything a maths out perfectly. And di music good and clean,” said Deans.

He explained that he was a frequent visitor to Boston and is always impressed with the preparation of the jerked pork, which he said has a second-to-none taste, especially with its many spices.

Even the kids could enjoy some of their favourite meals and snacks comprising snow cones, cotton candy, chocolate, bag juice, soda, and fruit juices, which were being sold at the festival on a day when the intense heat was virtually unbearable.