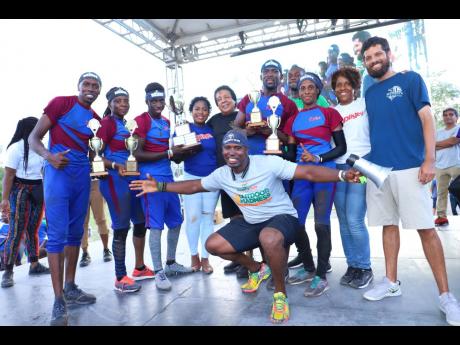 The 2019 Guardsman Games ended on Sunday, July 28, in frenzy and excitement, as all on hand to witness were treated to a spectacle of athletic competition.

Twelve teams were put through mental and physical obstacles as they fought through sweat, tears and bruises to complete four rounds of the Power Games.

When the dust settled on the Hope Zoo venue, however, it was the Supligen Vikings who stood tallest, claiming the title, prize monies of J$240,000, gift baskets courtesy of Jamaica Tourist Board and AmzOil, and passes to Konoko Falls and Puerto Seco Beach Club.

The Vikings proved their mettle, winning in three of four challenges, including the very last event of the day, a 17-obstacle race featuring the ice bath, an 18-foot A-frame cargo net, rising steps and a sloped wall.

The Vikings finished just ahead of the Supligen Troopers, who were in a three-way tie for the lead going into the final event. The Troopers claimed second and J$160,000 gift baskets courtesy of LASCO, and passes to Konoko Falls and Puerto Seco Beach Club.

Captain of the champion Vikings team, Gavin Francis, was elated with the win and had few words as he was still gasping for breath from the excitement of being named champions.

“We have been training for the last three months, running hills, boot camps every weekend and now we are here as champions,” exclaimed Francis.

“We felt we had a point to prove today, as we never did as well in the eliminations as we expected so coming into today we were only ranked seventh, but we knew we had much better in us and we showed it today. We had a team focus, so no matter what happened we kept pushing.”

For the finals, winning teams earned one point, while second place earned four, third place seven and 10 points for last place. The teams with the lowest point total to become champions.

The Vikings captain told no tales, as during one of the most gruelling rounds, where competitors used a rope to pull themselves across the Hope Zoo micro-dam, The Vikings boat took on water and began to sink, but they were still able to finish the challenge, though in last place.

After fighting back in Games’ third mini-obstacle course, The Vikings entered the final challenge with work to do, as The Hyundai Warriors, Armoured Avengers and Supligen Troopers had a tie for the lead.

The Vikings powered home in their final round, beating two table-toppers in the Troopers (second) and the Warriors (third), thus ending the latter’s title hopes. When the Avengers then failed to win their heat, the title slipped from their grasp and into the waiting arms of the Vikings.

The proceeds from the fourth staging of the Guardsman Games will go towards the Kind Hearts Foundation, which focuses on building schools in rural areas and other youth related charities.

Lt Commander George Overton, Chairman of the Guardsman Games, said the day was a success and that the sport of obstacle course racing is growing across Jamaica.