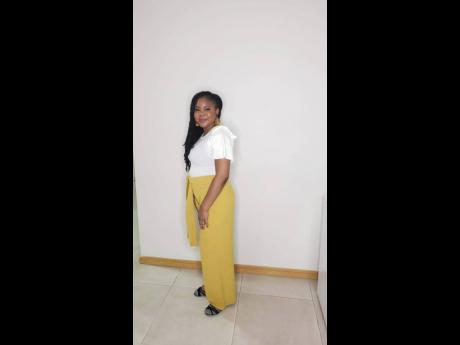 HAVING SOMETHING rare generally means that one possesses a unique and valuable gem, and often it is something that others would like to acquire for themselves. This logic, however, does not extend to Amoy Lewis, who has been living with a rare but chronic disorder called Neuromyelitis Optica Spectrum Disorder (NMOSD).

“Usually, I ask them if they know about lupus, and make the connection there. I tell them that my immune system is attacking the nerves on my spinal cord similar to lupus, where the immune system attacks healthy cells,” she explained.

Lewis shared that she has been battling this painful disorder for the last eight years, without very much relief. When she first started experiencing symptoms, they were passed off as being the result of stress.

“It started in 2012 when I noticed weakness and numbness in my right leg. I was starting fifth form so the doctors concluded at that time that I was stressed from exams,” Lewis explained. “I had migraines for days at a time, involuntary movement of my toes and eventually the leg. I now walk and swing my leg from the hip.”

The other symptoms she disclosed were urinary incontinence and constipation; in her opinion, those were probably the worst ones.

At the time of experiencing these symptoms and her subsequent diagnosis, Lewis said adjustment was not hard because of the support she received, but mentally she was not on the same level of acceptance.

“Adjusting was not hard at first, mainly because I have great support and for the most part my symptoms did not change, so I found ways to coexist with them,” she said, “I had a difficult time mentally as regards how people saw me. I didn’t look sick, but whenever I started moving around, people would stare ... .”

This issue was compounded recently when Lewis’ symptoms deteriorated, something she disclosed that she has not adjusted to as yet, and this often leaves her in tears. This graduation of symptoms coincides with the information shared on the NORD website, which states that most patients with NMOSD experience repeated attacks separated by periods of remission. Remission may last weeks, months or years.

“In September 2019, I woke up unable to move the other leg. I am losing sensation gradually up my body, along with severe muscle spasms, tingling and numbness in my limbs,” explained Lewis as she lists her current symptoms. “I am experiencing neurotic pain down my spinal cord and because my nerves are inflamed and they go everywhere, it sometimes feel like my whole body hurts. I lost control of my bladder altogether.”

With such a rare disease, Lewis explains that there are not many people she can talk to about her condition. As a result of the toll NMOSD has taken on her mental health, Lewis has attempted counselling, but said it was not useful. She had also started a business before her symptoms began to progress last year, but she has had to put the venture on standby because of the frustration she feels due to the inability to complete what she deems as simple tasks.

Treatment for NMOSD is mainly dependent on using steroids as a way of managing symptoms because the disease has no cure due to its rarity. The treatment itself has its own side effects, which affect Lewis’ everyday life.

The steroid treatment also added a few symptoms for itself. “I gained 100 pounds in less than a year, swelling in lower limbs, stretch marks and moon face,” she disclosed.