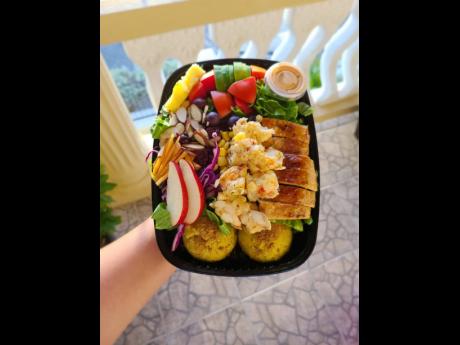 Contributed
A tasty dish containing grilled chicken and grilled lobster salad, inclusive of fruits and vegetables, with sweet mashed potato on the side. 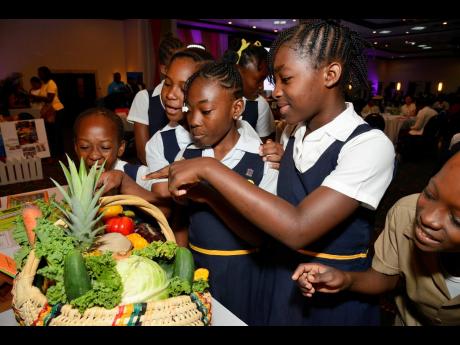 Ian Allen
Enthusiastic students from Port Morant Primary School in St Thomas are fascinated by this basket containing an attractive array of fruits and vegetables at the 4-H Club booth during the Ministry of Health and Wellness’s Caribbean Nutrition Day National Symposium and Awards Ceremony held at The Pegasus Hotel in Kingston on June 4, 2019.
1
2

AS STUDENTS across the Caribbean make their return to the classroom, an ambitious campaign promoting nutritious food in schools mounted by a coalition of regional health advocates is bolstering calls for the implementation of policies to curtail the deluge of unhealthy foods being promoted and sold to children.

The six-week digital campaign, ‘#ActOnFacts – The Food in Schools Matters’, encourages public and policymaker support for the introduction of policies limiting the sale and marketing of foods containing large amounts of sugar, fats and salt in and around schools, while increasing the availability of healthy foods and drinking water.

Spearheaded by the Healthy Caribbean Coalition (HCC), the campaign brings together a raft of partners: UNICEF, the Pan American Health Organization (PAHO), the Organisation of Eastern Caribbean States (OECS) Commission, the Caribbean Public Health Agency (CARPHA), the Heart and Stroke Foundation of Barbados (HSFB), the Heart Foundation of Jamaica (HFJ), the Jamaica Youth Advocacy Network (JYAN), with technical collaboration from the Food and Agriculture Organization of the United Nations (FAO).

The coalition argued that children spend much of their time at school where unhealthy food and sweet drinks – widely available and often cheaper than healthy alternatives – are heavily marketed. “Eating habits established when young can last a lifetime and one in three Caribbean children is already living with overweight and obesity. Overconsumption of unhealthy food is also the number one driver of non-communicable diseases (NCDs) such as diabetes, heart disease and cancer,” the group stated in a release.

CARPHA reports that the Caribbean has some of the highest rates of childhood obesity in the world. Executive director, Dr Joy St John, warned: “We can no longer afford inaction on regulating school environments. Ultra-processed foods have no place in our schools, which are meant to be environments which support physical and mental health.”

UNICEF Representative for the Eastern Caribbean Pieter Bult said: “Urgent action is needed to protect the present and future health of our children. Investing in healthy diets in school gives children the best start in life and will help them flourish both physically and intellectually, setting them on the path to achieving their full potential.”

“The vulnerable economies of the Caribbean simply cannot sustain the health and security threat posed by the increasing tide of overweight and obesity among children,” remarked Dean Chambliss, PAHO’s subregional programme director for the Caribbean.

“PAHO/WHO is working with regional governments to support the implementation of a comprehensive package of interventions to combat childhood obesity, including regulating the sale and marketing of unhealthy foods and beverages in school settings,” he added.

Importantly, the campaign also supports the regional food and nutrition security agenda, echoing similar calls made by agricultural stakeholders in Jamaica for the Caribbean to move towards growing what we eat and eating what we grow. Dr Renata Clarke, FAO subregional coordinator, emphasised that “farm-to-school programmes which link farming communities/farmers to school meals programmes not only expose children to local indigenous produce, but also contribute to sustainable farming livelihoods and support food and nutrition security”.

The healthy foods in schools coalition pointed out that some Caribbean countries have moved ahead with national policies which regulate the availability of sugar-sweetened beverages (SSBs) in schools, such as Trinidad and Tobago, Jamaica, The Bahamas, and, most recently, Grenada. Both Barbados and St Lucia have similar policies in process.

But Sir Trevor Hassell, HCC president, is adamant that more is needed. “Despite the increasing policy momentum, the pace of action does not match the urgency of the situation. The pandemic has highlighted our deep fragility underscoring more than ever the need to build resilience. The health of our region is the wealth of our region. We need to invest in prevention policies which target our most precious resource – our children.”

The campaign – which encourages parents to push for healthy school nutrition policies – uses largely monochrome imagery: playing on the concept that the link between our children’s health and diet is simply ‘black and white’.

It will be supported by a number of activities led by HCC’s youth arm, Healthy Caribbean Youth. According to the campaign’s youth champion, Pierre Cooke Jr: “This campaign sends a powerful message that schools must not be dumping grounds for unhealthy ultra-processed foods. We have a right to nutritious food and good health. Caribbean Governments have an obligation to protect this right. The evidence is unequivocal – ‘#ActOnFacts! – The Food in Schools Matters’ campaign WILL make a difference.”