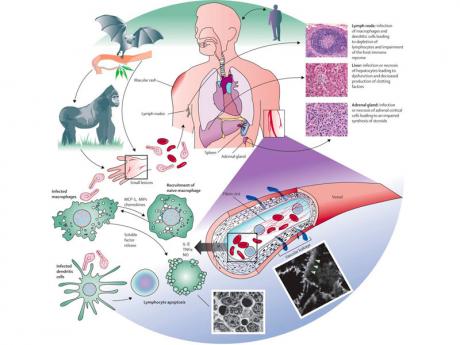 With Jamaicans on tenterhooks about the possibility of the deadly Ebola virus making its way to the island, reports yesterday that a Nigerian had checked into the Mandeville Regional Hospital with a fever and vomiting caused panic to explode in the hospital and in sections of the central Jamaica town.

One medical worker told The Sunday Gleaner that he had locked himself in his room in the proximity of the hospital after hearing the reports, while several callers out of Mandeville expressed fear that the dreaded virus could have finally made it to the island.

Attempts to contact Health Minister Dr Fenton Ferguson and acting Chief Medical Officer Dr Marion Bullock-DuCasse were unsuccessful yesterday, but senior medical officer at the hospital, Dr Everton Dawkins, told The Sunday Gleaner that after medical checks, there was nothing to lead to suspicion that the man has the Ebola virus.

"We suspect it was a case of food poisoning based on the proximity to his last meal and his reaction to the treatment," said Dawkins.

"He had vomiting and dizziness, but there was no fever or any of the other symptoms of Ebola, so he was treated and discharged," added Dawkins as he confirmed reports that the Nigerian man lives in Jamaica but had travelled home in July and returned to the island in August.

That was in line with reports from a medical source who had earlier told our news desk that the man "returned to the island in August, so that was well outside of the incubation period".

Added the source: "He went out drinking Friday night and was vomiting, so there were no symptoms of Ebola."

But that clarification came long after word spread inside the hospital and on the streets of Mandeville that a Nigerian man was in quarantine at the hospital after turning up at the facility sweating profusely and with a high temperature.

One medical source told our news centre that a man telephoned the hospital yesterday morning saying that he was a doctor and asked to speak to the doctor on duty in Accident and Emergency.

When he was not connected, the Nigerian presented himself at the hospital at 5 o'clock yesterday morning, sweating profusely and vomiting. He was reportedly placed in isolation in one of the rooms in the Accident and Emergency Department and was seen by a nurse, who was not told of the man's history.

The source said the nurse took the man's temperature without wearing any protective gear. Panic quickly broke out at the hospital as that nurse and other medical personnel refused to tend to the man on hearing that he was from Nigeria.

Head of the
Manchester Police, Superintendent Melvin Brown, later confirmed that
police at the Mandeville station were called to the hospital after the
man refused to submit to further tests. A police team was dispatched to
the facility, at which time the tests were done without further
incident.

However, The Sunday
Gleaner source claims that some medical personnel locked
themselves away and refused to enter the hospital. "We could see the
nurses rushing to put on masks and things, and they weren't saying
anything to us," one Mandeville resident told our news
centre.

"It was not until we see somebody come talk to
them that it calm down," added the resident.

Dawkins
admitted that there was some panic, but argued that in this time, the
medical personnel should be commended as there is need for heightened
awareness.

According to Dawkins, the diagnosis that
there was no Ebola threat was made in consultation with the health
ministry and
others.