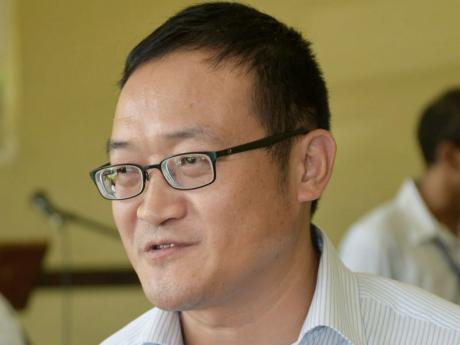 Wu: I have a few options for me in China.

Western Bureau:When Dr Wu Huaixiang replaced Francis He as chief executive officer of Pan Caribbean Sugar Company (PCSC) in June 2013, there was a collective sigh of relief as He was viewed as contentious and hard to relate to.

However, after just 18 months, during which he transformed the acrimony he inherited into harmony, the affable Wu has tendered his resignation to the PCSC and is returning home to China to pursue new endeavours.

Speaking with The Gleaner, Wu confirmed his resignation but refused to be dragged into a discussion about his future, only stating that he would be working in his specialist area, which is food and agriculture.

"I am not sure. I have a few options for me in China (that) I will have to think about when I go back, but it will be in agriculture and foods. That's for sure," Wu said.

"I am a professional manager and not (just) a Pan Caribbean guy," quipped Wu when pressed as to what his future role with the local Chinese operations might be.

Wu's departure comes amid significant improvement in the working relationship between PCSC and other players in the sugar industry, which was strained on account of the non-traditional approach to business, taken by the Chinese, and the Jamaican cane-farming tradition embraced by local farming groups.

During He's two-year reign, the relationship between the Chinese and the locals got so frosty that many felt the PCSC had no choice but to replace the seemingly uncompromising He with Wu, who is said to be more accustomed to the Western lifestyle.

On his arrival in Jamaica, Wu, whose résumé is packed with managerial experience in the food industries throughout Europe and Asia, was

confronted with some pressing industrial matters - including a dispute arising from the company's failure to adhere to a pre-divestment agreement to provide farmers with fertilisers and herbicides for replanting that led to protests at Frome.

While things have moved from abnormal to normal during his stewardship, Wu has refused to take the credit for the new reality, instead lauding the input and leadership of both parties (PCSC and local stakeholders) and late Agriculture Minister Roger Clarke.

"I think the relationship has changed significantly. There is now a great relationship with the Cane Farmers' Association and individual farmers," said Wu.

"There is a great level of confidence in their leadership and ours. In fact, the sugar marketing agreement with the Cane Farmers' Association was made possible through Roger Clarke."

Towards the end of his tenure, Wu was instrumental in securing a US$10 million loan facility for cane farmers and also put in place plans for local farmers to access 2,000 tons of fertiliser from the PCSC to support their preparation for the 2014-2015 crop year.

Since becoming a player in the local sugar sector in 2010, the PCSC factories have underperformed. Frome, the largest sugar estate in Jamaica, churned out just over 34,000 tons of sugar in the 2011-12 crop year - its worst performance since the early 1900s. Frome and Monymusk combined churned just 55,201 tons for the 2012-2013 crop.

Wu had stated in a previous interview that he did not expect a real turnaround in the performance at the factory before 2014-15 when state-of-the-art equipment being manufactured in China would be installed.

Despite the pumping of millions into agriculture and the retooling of the two facilities, which included a massive injection of more than US$100 million to beef up its operations at the Frome Sugar Estate for the 2014-2015 crop year, Wu has refused to put forward projections regarding the immediate future of the two factories.

"I don't know in future, but as far as I know, we continue to replace the old machinery, but one can never tell the future ... . We have the equipment to improve agriculture and the efficient running of the factory for sure," argued Wu.

Despite the improved working relationship, Wu said the Chinese are still not in sync with the agricultural practices of the locals. He suggested that a more scientific approach might be needed if the stated objective of the two factories, to realise 1.2 million tons by 2017-2018, is to become a reality.

"It's a system that I have been trying to change, but it is hard," said Wu. "Factory upgrades are easy ... but the agriculture aspect is challenging. It needs to be more scientific because if a worker is to be at work at 7:30 a.m. and he arrives at 8:30, it cannot be good for business, and the energy cost is frightening, rather incredible ... I could not believe it ... but soon, PCSC will be selling energy to the national grid instead of buying."

As he begins to prepare himself to return home to China, Wu, who has seemingly fallen in love with aspects of the Jamaican lifestyle, will be leaving with many good memories.

"I have been to a lot of countries ... Jamaica is among the very best ... from my heart, my stay was great, and I love the climate and the people," said Wu. "The Jamaican people are reasonable. Once they understand what you are about and what you want to do, they are great to work with."