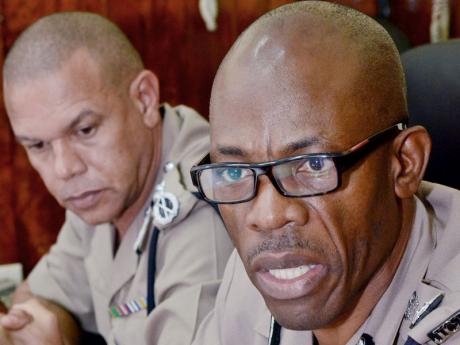 Dr Carl Williams (right), commissioner of police, and Deputy Commissioner of Police Clifford Blake speak with members of the media during a press conference at the Office of the Police Commissioner on Old Hope Road in St Andrew yesterday. - Rudolph Brown/Photographer

WITH MURDERS declining by 16 per cent last year, Jamaica appears on track to slash its homicide rate to 25 per 100,000 of the population by the end of next year, as set out in the social partnership agreement between the Government, Opposition and civil society groups.

However, the country's police chief, opting for caution amid positive statistics, is shying away from making any predictions as to whether the 2016 target will be met.

Last year, Jamaica recorded 1,005 murders - the lowest figure in a decade and 195 less than 2013 - but needs to reduce murders by a cumulative 305 over the next two years (based on a 2.8-million population estimate) to attain the target set by the social partnership.

Police Commissioner Dr Carl Williams told The Gleaner yesterday that his focus was not on setting targets, as he was aware of the criticism that would follow if they were not achieved.

"I am not about to start setting targets now," Williams said, moments after he announced, during his first press conference, that the 1,005 murders recorded last year trimmed the country's homicide rate to 36 per 100,000.

That rate suggests the Jamaica Constabulary Force (JCF) based its figures on a 2.8-million population.

"(I'm) not about to start setting targets for you because you will hold me to them next year or the year after," Williams stressed.

"If we could reduce murders to 10 in any given year, that is what we would try to do. But as it stands right now, we are working and doing everything to ensure that we reduce it to the lowest possible number," he continued.

National Security Minister Peter Bunting had initially indicated that the Government was seeking to reduce murders to 12 per 100,000 by 2016, a target that would shift Jamaica's ranking from one of the most dangerous countries in the Caribbean to among the safest.

But with just under 2,300 murders reported over a two-year period, that target was revised to 25 per 100,000 by the social partnership.

However, one week into the New Year, Williams told journalists yesterday that the police have already recorded 24 murders - an average of three per day.

As a result, he said the Jamaica Constabulary Force (JCF) would employ a number of anti-crime strategies to finally break the back of criminal gangs and stem the "arms race" between them.

Glenmore Hinds, deputy commissioner in charge of crime, said disarming criminal gangs is a central plank to these strategies.

One of the strategies, Hinds indicated, is the formation of a guns-for-trade task force within the JCF to go after members of the criminal underworld who are involved in the guns-for-drugs trade.

He said already the task force has identified 21 syndicates across the island that are involved in the trade of marijuana for guns.

"It is through this vehicle that we intend to disarm most of the criminal gangs this year. It is a fact that once guns exist in the wrong hands, our murder rate is difficult to stem," Hinds said.

In addition, he said the anti-gang legislation passed into law last year would be a key part of the JCF's attempt to dismantle criminal gangs.

"We are pursuing 400 investigations under the legislation and it is anticipated that by the end of this year, we should see over 500 persons charged under this legislation," Hinds said.