Dudus capture was to be 'simple' 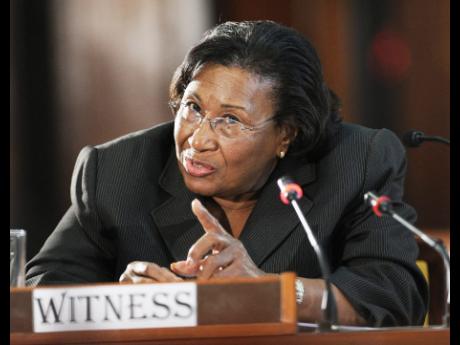 Former Justice Minister and Attorney General Dorothy Lightbourne has revealed that she thought the 2010 incursion into the West Kingston community of Tivoli Gardens to capture then-fugitive Christopher 'Dudus' Coke would be a "simple operation".

Lightbourne's disclosure came during cross-examination before the West Kingston Commission of Enquiry yesterday on whether she was briefed by the heads of the security forces about a "massive operation" to arrest the convicted drug kingpin.

"No. It was not a massive operation. I thought it was just a simple operation to go into Tivoli [Gardens] and arrest Mr Coke," she said during cross-examination by attorney-at-law Lord Anthony Gifford, who is representing the Office of the Public Defender (OPD).

Her answer, however, triggered more questions by Gifford.

"You knew that the Government had determined, from advice, that a massive operation was needed in Tivoli and that knowledge was with you from as far back as the 17th of May [2010 when she informed Cabinet that she was going to sign the authority to proceed with the extradition request for Coke]?" Gifford questioned.

"No, no, no. There was no advice that there was [to be] a massive operation. No, no. I did not get that advice," Lightbourne insisted.

The West Kingston commission of enquiry is examining, among other things, the conduct of members of the security forces during the May 2010 operations. A report by the OPD concluded that 76 civilians and one member of the Jamaica Defence Force were killed in the operation.

The former justice minister also denied a suggestion by Gifford that one of the reasons for "tragedy in Tivoli" was her "unnecessary delay" in signing the authority to proceed with the request for Coke's extradition.

Lightbourne has testified that she first saw the extradition request on August 26, 2008, and that she signed the authority to proceed on May 18, 2010.

Seeking to explain the delay, the former attorney general reiterated, in addition to the constitutional issues raised by her administration, that the wrong procedure was used by the United States (US) to have Coke sent there to stand trial on drug and firearm charges.

"I understand that the American government had sought the advice of the DPP [director of public prosecutions] as to what procedure they should use, either the provisional warrant method or the ordinary extradition request, and they were advised not to go the provisional method ... ," Lightbourne sought to explain.

Lightbourne also testified that she did not give anyone in the Jamaica Labour Party (JLP) documents relating to Coke's extradition.

The former justice minister said she does not know if anyone in the JLP - which formed the government at the time - had copies of the extradition documents as part of its initiative to engage US lobby firm Manatt, Phelps & Phillips.

She also acknowledged that if copies of the extradition documents were found at Coke's Tivoli Gardens base, that should not have happened based on the procedure for the handling of extradition requests.

"They ought not to be there," Lightbourne insisted.

The hearing will resume on Thursday.