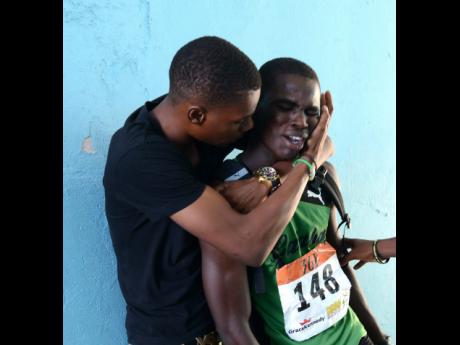 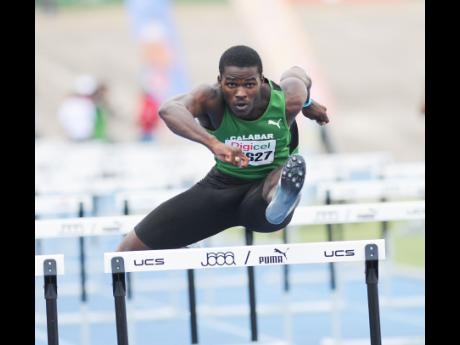 Ricardo Makyn
Calabar's Michael O'Hara in action in the boys' 110m hurdles at the GC Foster Classic at the National Stadium earlier this month.
1
2

The pictures of a weeping Calabar star Michael O'Hara being comforted by former Calabar man, Olympic and World Championships 200m medallist Warren Weir, was one of the most memorable coming out of last year's ISSA Boys and Girls' Athletics Championships.

O'Hara, 18, the champion boy for 2011, 2012 and 2013, was overcome with disappointment after being disqualified from the semi-final of the 100m. A third-place finish in the 200m compounded a rather under-par campaign for the multi-talented sprinter; but that was last year.

Eager to get back on track and correct last year's mistakes, O'Hara told The Gleaner he has grown stronger after his experiences and is looking forward to once again lead his team to the Mortimer Geddes Trophy.

Unbeaten in the 100m

"I'm feeling well, training has gone very well. The entire coaching staff is behind me. My mother, as always, is fully supportive of me, so I'm feeling really good about everything and things are going really well," said O'Hara, who has gone unbeaten this season in the 100m, with a second-place finish in the 200m at the recent Carifta Trials.

"I'm really looking forward to stepping back on the track at Champs this year. I'm looking to use all the experiences from last year,

my faults and mistakes, as motivation and to prove my strength throughout this championships," he added, before sharing the struggles he endured while dealing with the setbacks.

"It was tough dealing with that disappointment last year, but I had to remain mentally strong and conquer the situation and pull through," O'Hara said. "I know that I am a very talented athlete and I'm very focused. I'm coming back stronger and ready to do better."

Calabar are once again expected to scrap it out with rivals Kingston College and Jamaica College for top honours with O'Hara's expected points contribution being integral to the Red Hills Road-based school's ambitions of claiming its second four-peat in Champs history, after their 1930-1933 run.

"I'm not afraid of the pressure or the expectation. I am used to it. My coach (Michael Clarke) has taught me a lot about how to work under pressure, so I use his advice, and whenever the situation comes up, I feel very comfortable," O'Hara said.

Pressure is something he will have to face in abundance at this year's Champs, particularly in the Class One 110m hurdles, where he will face World Junior and Youth Olympic champion Jaheel Hyde (Wolmer's) and a slew of other top candidates such as his own teammate Seanie Selvin, Marvin Williams (STETHS) and Roje Jackson-Chin (St Jago), all ready to test his resolve.