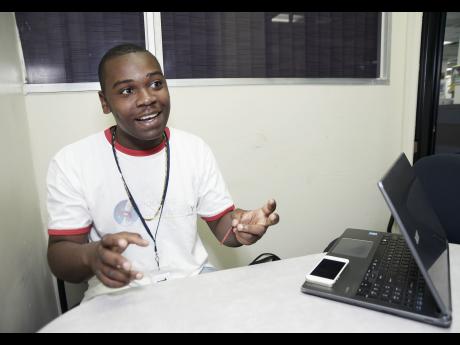 Jadan Johnson, CEO of Vybz Media Group, speaking with The Gleaner on the weekend.

Johnson, who started Vybz TV at 10 years old, by just shooting videos with his cell phone to feed his live online stream, remains leader of his team six years later.

There are currently eight employees within the team of innovative youths, headed by the Munro College student who already holds a diploma in business (marketing) from the Wharton School, one of the top business schools in the world.

Johnson told The Gleaner that whatever he learns, he tries to share with his team.

Vybz Group is a creative social media marketing group of companies that has been around for the past two years after being birthed from Vybz TV, which remains online.

The Jamaican version will, however, see 13- to 23-year-olds competing on April 11-12 at Start Up Jamaica, located on Duke Street, downtown Kingston.

"My dream is to see young people stop sitting there and waiting for someone else to develop something that they can jump on, but get up and go for what they want. We are trying to create a nation of thinkers and innovative leaders in the market," Johnson said.

By providing 'makerspace', Hack Gen Y intends to engage students in a creative, fun and inviting environment that will spur innovation and collaboration.

Coding will also be introduced to persons with no prior experience, through the assistance of mentors and speakers.

At a cost of $1,000 to participate, individuals will only need to bring a laptop and charger, cell phone and charger, sleeping bag, pillow, toiletries, and a few changes of clothes.

Johnson's intention is to create self-inspiration among contestants.

Recalling how he moved from just having an idea to owning a business, he believes that Jamaica has the potential to create its own Silicon Valley, or 'Jam Valley', where, instead of having the island's developers leaving the country, they can stay here and help develop Jamaica's information technology sector.

"We have to motivate our youths to challenge the field of technology," said Johnson.

"You look around the world and see how a lot of great inventions come from just having an idea, so we have to want to put Jamaica in the game and join the world of tech leaders, to encourage investors to spend their money," he explained.

Noting that he would remain silent on the prizes to keep them a surprise, Johnson said interested persons can visit signup.hackgenyja.com, or visit the Hack Generation Y Facebook page to sign up or receive more information on the competition.