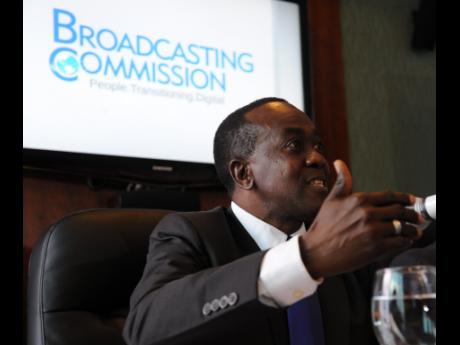 Ricardo Makyn
Ricardo Makyn/Staff Photographer Professor Hopeton Dunn, chairman of the Broadcasting Commission, speaks at a press conference held at the offices of the commission yesterday.

Cable operators across Jamaica have until May 31 to remove 19 of 98 channels they have been illegally transmitting, in breach of United States intellectual property rights.

Yesterday the Broadcasting Commission revealed that a cease and desist directive has been issued to all 49 cable television operators across the island who have been transmitting channels and programmes without a license.

Speaking at a press conference at its New Kingston office, chairman Professor Hopeton Dunn said this represents the first phase of a process of compliance.

"Over the past six months, we have been in intensive meetings and discussions with local cable operators, their trade grouping JACCO (Jamaica Association of Community Cable Operators), international channel owners, the Office of the United States Trade Representative, Ministry of Foreign Affairs and Foreign Trade, among others, on this matter," he said.

"Our focus has been on obtaining legitimate content of distribution in Jamaica and arriving at a strategy for the orderly, phased elimination of unlicensed channels from cable."

He said the commission would be monitoring the situation and give timelines at a later date for the removal of the other channels.

Dunn said Jamaica has to take concrete steps to protect its image and to guard against international perception that this is a rogue country when it comes to copyright protection. He said going forward, it will not be business as usual.

He urged cable operators that as a result of this directive and the planned actions, to make the necessary arrangements with their subscribers, including for refunds and channel substitution.

The chairman also called for the government to provide the legislative support to better regulate the sector.

While operators have the option to regularise licensing agreements with the US companies for some of those 98 illegal channels, they will not be able to obtain license for several others, as those are licensed for viewing in the US market only.

LIST OF FIRST 19 CHANNELS TO BE REMOVED BY MAY 31