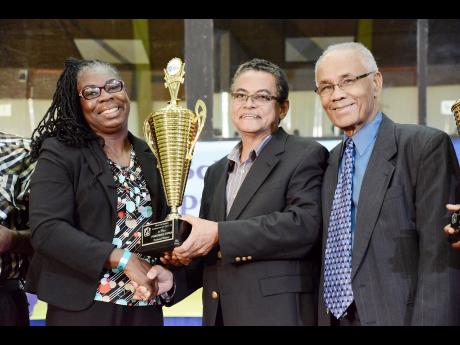 The Portmore Pines community in St Catherine walked away with the top prize for the National Housing Trust (NHT) Best Schemes 2013-2014 competition yesterday, at the awards ceremony which was held at the Jamaica Conference Centre in downtown Kingston.

Andrea Barrett-James, president of the community's citizens association could not stop laughing as she spoke to The Gleaner, explaining that it has been several years of hard work. She was, however, quick to point out that she has no regrets.

"This is the ultimate prize because it was a lot of work and dedication. I have to give credit to my team. I have a wonderful group of executive members and we are a scheme blessed with people power," she declared.

"We have fitness programmes, gospel concerts, sports day, among other activities, and all of this is geared towards creating avenues which will bring people together. Sometimes we feel overburdened, but the hard work pays off," she said.

The community received a trophy and $1 million. The money, she said, would go towards educational initiatives.

"Education is our main focus going forward. I must give credit to the youth because they played a major part in our beautification projects, and their development has to be priority," she added.

The Chudleigh community in Manchester was the first runner-up while the Wickie Wackie community in St Andrew was placed third.

Newly appointed chairman of the NHT Dr Carlton Davis lauded the work of the NHT in using the competition as a platform for maintenance.

"Some of these schemes go back as far as 30 years, and if they are not maintained, they will deteriorate. One of the things that the competition does is help to maintain these schemes. It's always good to see persons being awarded for innovation," he said.

"Going forward, we will certainly look at how we can improve this competition. We would certainly like to increase the number of communities being qualified for the competition, but I am certainly happy that it has survived all these years," he said.

Similarly, Minister of Local Government and Community Development Noel Arscott said his aim is to further enhance the development of all Jamaicans.

"No matter how small, every positive act by a community member strengthens leadership at the grassroots level, builds national pride and makes the society better. The National Housing Trust has done a tremendous job in providing housing solutions for contributors," Arscott said.

"We have witnessed families emerge from landlessness and dependency to property ownership and economic and social independence. Such contribution is critical to the building of a strong and prosperous nation. Our Government believes in strong communities, where people's standards, decency and morals are embraced," he declared.