A father's agony: dead son, a wife with lupus and embarrassing stories 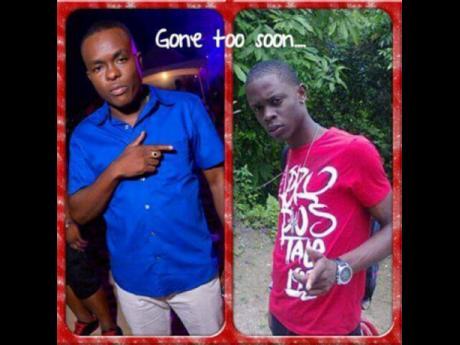 Contributed
Constables Anduialy Smith (left) and Kemo Walsh who were killed on Sunday, May 3 in what appears to be a case of murder-suicide in White River, St Ann.

It's been a rough 24 hours for 58-year-old Nathaniel Smith, the father of the St Ann cop alleged to have accidentally shot his best friend dead, before taking his own life.

Just when Smith, an auto parts dealer, was contemplating where to find the next dollar to buy medication for his wife who has been battling the autoimmune disease, lupus, he received a call in the wee hours of Sunday, May 3 to immediately head to the St Ann's Bay Hospital in St Ann because his son had been shot.

Smith rushed to his car and set off for the two-hour journey from his quaint, little district of Albion in Manchester to St Ann's Bay.

But the anxiety was overwhelming, so Smith called his brother in St Ann and asked him to investigate until he got there.

The news was not good: Smith's son, 31-year-old Anduialy, a police constable, had been pronounced dead.

The young constable's colleague, Kemo Walsh, 20, from Highgate, St Mary had also been killed and the claim was that it was Constable Smith who shot Walsh before turning the weapon on himself.

In 2003, an older son, who had just enlisted to the Jamaica Defence Force died in a car crash around five kilometres from their home.

This time round, however, the pain is worse for Smith.

“It is not an easy thing, because, let me tell you, his mother is sick,” he lamented.

The businessman says it has been the most emotionally exhaustive period for him with his wife, 52-year-old Marvia, battling lupus, complicated by diabetes.

To compound the agony, Smith says there have been embarrassing accounts of the circumstances that led to the death of his son – a Manchester High School past student and graduate of the Northern Caribbean University in Mandeville.

But despite the claims, Smith has burning questions on the management of the crime scene after the first shooting and he is demanding answers from the Police Commissioner, Dr Carl Williams, and his Central Manchester MP, Peter Bunting, who is also the National Security Minister.

"I hear that the other guy (Walsh) had his gun, and he threw the gun and give it to my son and the gun go off and shot the other guy, which I can hardly believe," Smith said.

The incident happened at a bar in White River, near Ocho Rios, St Ann during a birthday celebration.

Smith said he was further told that other police personnel who were at the bar picked up Walsh and placed him in a police pick-up.

He said he learned that his son attempted to sit in the vehicle, but was reportedly barred by his police colleagues, and so instead, he jumped into the back of the pick-up.

"On the way now, there was another explosion," Smith said, and that's when his son reportedly killed himself.

After the initial shooting

The decision to have allowed his son to keep the weapon after the initial shooting is among the reasons Smith is upset.

"If it was my son’s gun (that) went off (and) shoot somebody, don’t you are supposed to take the gun from him, as another police?" Smith questioned, insisting that there must be "a full investigation".

The Police High Command has launched a probe into the incident and the Independent Commission of Investigations is also probing the matter.

Smith said he has been briefed by the acting St Ann Police commander, Superintendent Steve Brown, and the investigators from INDECOM.

Anduialy Smith, popularly called ‘Bottle’, was a member of the St Ann Police Football team and also played on the Manchester High School football team while he was a student.