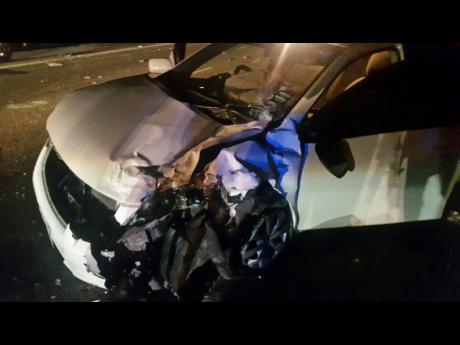 Contributed
The car in which Youth and Culture Minister Lisa Hanna was travelling which crashed along Highway 2000 Sunday evening.

Youth and Culture Minister Lisa Hanna is now at hospital undergoing tests after she was involved in a car crash along Highway 2000 near the Spanish Town exit on Sunday evening.

Hanna was a passenger in a white motor car heading towards Kingston which slammed into the back of a Honda Accord.

It's not clear who was driving the car in which Hanna was travelling.

However, immediately after the crash, she was reportedly whisked away to hospital by police personnel said to have been travelling behind her.

The occupants of the Honda Accord are also at hospital under going tests at this hour.

Eyewitnesses say the Honda Accord had reduced its speed on approaching the scene of an accident on the highway.

That's when the vehicle in which Hanna was travelling slammed into its rear resulting in extensive damage to both vehicles.

A short while ago, Hanna's partner, Richard Lake, confirmed that the Government minister was at a private hospital in the corporate area but provided no information on her condition.