Jamaica has nothing to fear from UK, EU tug of war - official 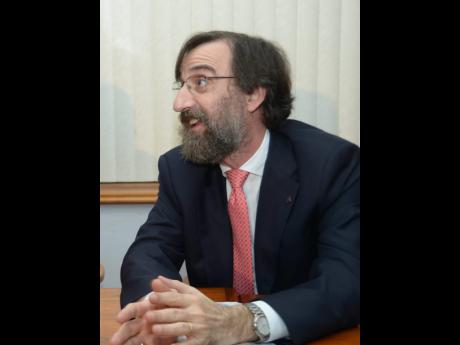 Charge D'Affaires of the European Union (EU) Delegation in Jamaica, Jesus Orus Baguena, has asserted that he does not foresee any short-term impact on the relationship with Jamaica as it wrestles with the United Kingdom on the way forward.

With a referendum by UK's populace on the cards, British Prime Minister David Cameron has asserted that negotiations to reform the UK's relationship with the regional body are receiving good response.

Although Cameron has issued a caution that the process will "take time" and there will be "ups and downs" in the months ahead, Baguena said he did not anticipate any ripples in the near future.

With the UK being a powerful member of the EU, Cameron has been holding bilateral talks with Irish Prime Minister Edna Kenny and President of the European Parliament Martin Schulz as he continues to press for changes in the EU.

"The relations between the EU and Jamaica are quite good as things are going very well both in political and economic terms as it has been for the past 40 years," said Baguena.

"We have gone through phases, but overall, I think it's quite a good relationship," he added.

"We have a new envelope of bilateral cooperation, which has been agreed to and signed, which guarantees financing until 2020 at least," said Baguena.

He said the EU would be continuing with existing cooperation programmes as well.

On the issue of trade, Baguena said that despite criticisms levelled at economic partnership agreements (EPAs), the programme is proceeding relatively smoothly.

EPAs are trade and development agreements negotiated between the EU and African, Caribbean and Pacific regions engaged in a regional economic integration process.

"All of the possibilities have not been exploited on the EPA, and with the five-year review set to take place," he said, "some lessons must be learned."

Added Baguena: "The possibilities are there. We have a framework to work with together."

At the political level, Baguena said the EU would continue to offer its support.

"Jamaica is a free country and not adversarial at all, and so we raise issues that we want to see improved."

He added: "If the answers is yes, we want to stay in the EU. I don't see any impact at all. It would be business as usual except for a period of uncertainty."

Baguena said an eventual exit by the UK from the EU is not foreseen in the treaty.

"We really don't know what the procedure would be and the impact, but if there is, it would take a long time and not an overnight impact."