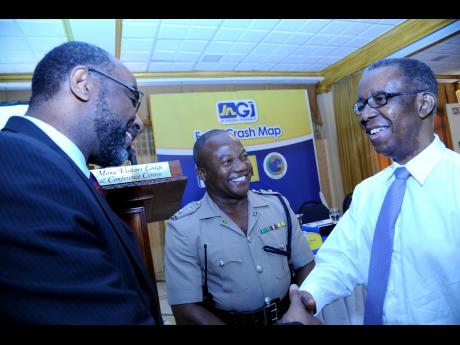 Ricardo Makyn
Earl Jarrett (left), general manager of Jamaica National Building Society, speaks with Senior Superintendent of Police Calvin Allen (centre), head of the Traffic and Highway Division, and Dr Lucien Jones, vice-chairman of the National Road Safety Council, during the launch of the JNGI Fatal Crash Map at the Mona Visitors’ Lodge; at the University of the West Indies in St Andrew yesterday.

Head of the Traffic and Highway Division of the Jamaica Constabulary Force Senior Superintendent Calvin Allen has expressed concern about the increasing number of fatal accidents involving motorcyclists.

Speaking during the launch of the JN General Insurance (JNGI) Fatal Crash Map Programme, Allen noted that fatalities from motorcycles have surpassed those from incidents involving pedestrians.

"For the first time in a long while, motorcyclists are leading in the fatal count, pedestrians were always out front," he said.

The traffic chief spoke to what he described as a worrying trend in the behaviour of some motorcyclists, particularly in the western end of the island.

"What is happening in that neck of the woods is somewhat different and frightening. If you journey right now to the Savanna-la-Mar Police Station, (you'll see) we have about 380 motorcycles that have been seized and parked there, but, ironically, tomorrow morning, you will see the very individual from whom one of those motorcycles was seized riding another cycle," he said.

Allen disclosed that these individuals are not returning to claim seized motorcycles and questioned how they are able to finance multiple motorcycle purchases.

Data obtained from the Traffic and Highway Division regarding fatal incidents was further highlighted by Dr Parris Lyew-Ayee, director of the Mona GeoInformatics Institute.

Lyew-Ayee, in demonstrating the use of the JNGI Fatal Crash Map, noted that in the 20-30 age group, fatal crashes were at the highest level for the month of March based on data obtained since the start of the year.

The data also indicated that Saturdays have a high incidence of fatal crashes as opposed to Fridays.

The MGI director also pointed out that the main cause of crashes is loss of control and not excessive speeding as is generally believed.