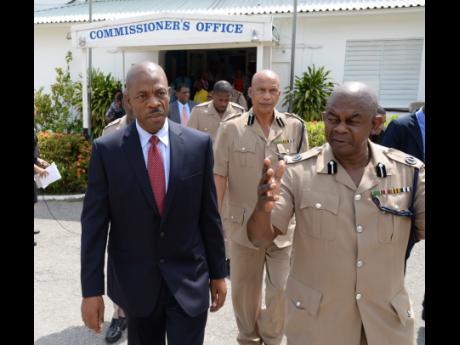 Jamaica's chief crime fighter, Dr Carl Williams, has given himself full marks on the success of his 10-month tenure as police commissioner, as the murder toll shot past the 600 mark on Sunday.

Asked at a press conference he convened yesterday at his Old Hope Road office, to grade himself on his performance since assuming the position in September of last year, Williams declared: "10 out of 10."

Williams suggested that the yields of his work at the helm will not be seen immediately. "The truth is that there is a whole lot of things that are happening that you are not going to see the results right away," he asserted.

With National Security Minister Peter Bunting a no-show at the press conference, Williams claimed that he was getting positive support from the Government - the policy arm of the crime-fighting machinery.

Williams said necessary tangibles, as well as intangibles, were forthcoming from the Government, even as he served notice that he would be approaching Parliament to amend the Firearms Act to incorporate a "Trafficking in Arms" provision.

The crime chief expressed dissatisfaction with the current provision that prevents an individual, apprehended with a cache of firearms, to be charged with possession of firearm and as such, likely to escape the full brunt of the law.

After pointing to an intensified police presence in troubled areas, and the still-to-be-fleshed-out, Get-the-Guns Campaign, as the intended deterrents to the raging murder wave, Williams was asked whether the constabulary had run out of ideas in fighting the scourge.

He said: "These are good ideas which have been tweaked. They are best practices which have been used and have brought us good results before, and so I think we should refine, implement and give them a chance to work."

Added Williams: "We have seen where they have worked in some divisions and we are confident that they will work in others. We just need to push them to ensure that they are successful."

Williams promised that rewards will be offered to members of the public who assist the police in getting illegal weapons out of the hands of trigger-happy criminals.

"This campaign is going to enlist the support of all Jamaicans through a rewards scheme. We are going to be giving rewards to members of the public who assist the police with the information to seize the guns," he said.

Even as he promised a high level of confidentiality in the Get-the-Guns Campaign, Williams said that details would be revealed in short order. "The involvement of citizens is only one aspect of the Get-the-Gun Campaign," said Williams.

He said that presence of crime fighters on the streets will be intensified.

Williams disclosed that another superintendent, to assist Senior Superintendent Steve McGregor, will be sent to St James, which has recorded 102 of the 602 murders.

Another target of the crime fighters, Williams said, is the guns-for-drugs trade between Haiti and Jamaica, in which 39 syndicates have been identified.

He lamented that too many older persons, women and children were becoming part of the murder statistics.

With lottery scamming believed to be responsible for a major part of the murder wave, Williams disclosed that since the start of June, the police have arrested 25 persons and seized a number of items.