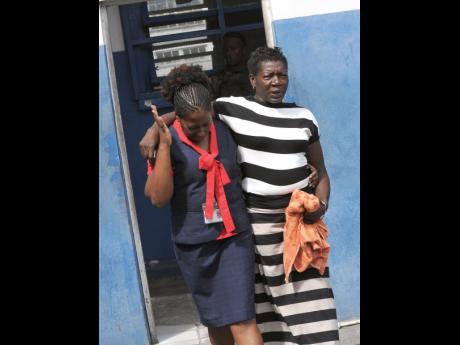 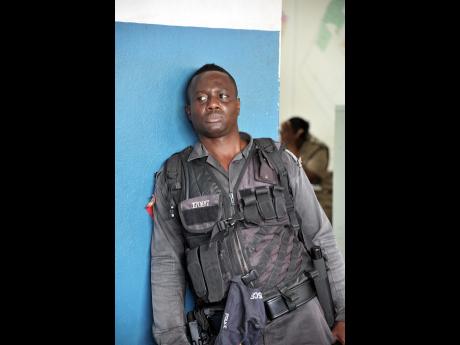 Norman Grindley
A policeman at the Denham Town Police Station in a sombre mood after one of his colleagues was shot and killed by gunmen on a bus on Tuesday night. 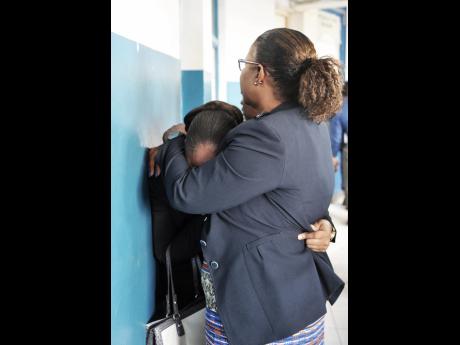 Norman Grindley
Police personnel at the Denham Town Police Station grieve the loss of their colleague. 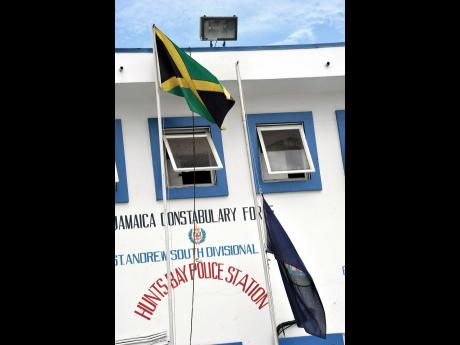 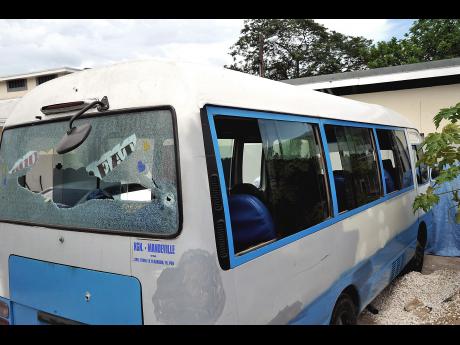 Norman Grindley
The Coaster bus woman Constable Crystal Thomas was travelling on when she was shot and killed by gunmen on Tuesday night. 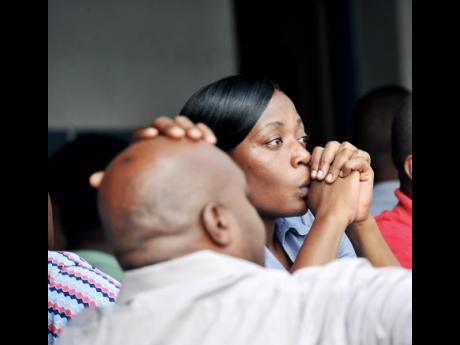 Norman Grindley
Police at the Denham Town Police Station in a sombre mood after one of their colleagues was shot and killed by gunmen on a bus on Tuesday night. 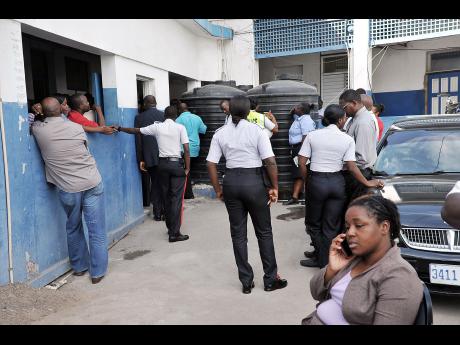 Norman Grindley
Police at the Denham Town Police Station gather around after hearing of the killing of a colleague on Tuesday night. 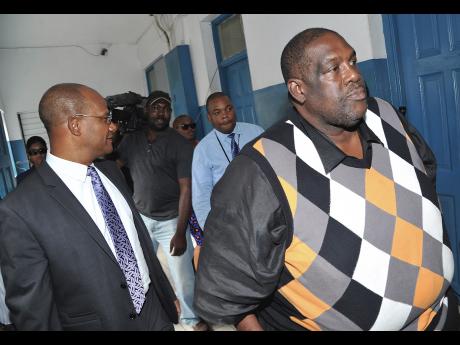 Norman Grindley
Senior Superintendent of Police Cornwall ‘Bigga’ Ford (right) escorts National Security Minister Peter Bunting, who visited the Denham Town Police Station in west Kingston, to get an update after the murder of woman Constable Crystal Thomas, who was shot and killed by gunmen on a bus on Tuesday night. 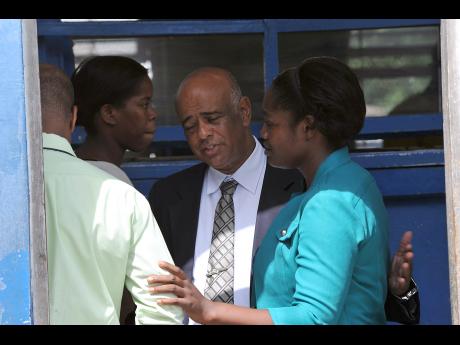 It was just after 7 o'clock on Tuesday evening when Crystal Thomas telephoned her mother to ask a favour.

Jacqueline Brown, a vendor in the Spanish Town area, recounted how her daughter needed bus fare to go back to work at the Denham Town Police Station in the tough west end of Kingston, where she worked as a constable for the past two years.

"Mi tell har me have two plantains, two packs of clothes pins and her [uniform] belt and she should come and collect them," Brown told The Gleaner last night through tears.

Brown said she became concerned after waiting at her stall for more than two hours with no sign of her first child, while her male companion, who works in Stony Hill, St Andrew, got there before Crystal.

"My boyfriend a come from Stony Hill, Crystal suppose to reach before him ... . All me a look me can't see har a come. Me get up and go out inna di road and a wonder wha happen to Crystal."

Brown would soon get some indication that something was amiss.

She said one of her sisters came to the stall and attempted to break the news of her daughter's death to her.

"She seh one girl tell har seh she hear seh Crissy [Crystal's pet name] meet inna accident in a bus, but she nah come out full," Brown recounted. "My sister, she a hitch [hesitate] an a go roun' go roun."

The distraught mother said her world came crashing down when another one of her sisters came to the stall and gave her a hug before breaking down in tears.

"Me seh 'wha happen?' Me even a seh to her seh me glad fi see you because a yesterday me a call you name," Brown remembered telling her sister with no inkling of the shocking news she was about to deliver.

"She seh to me, 'me hear seh Crissy get shot, enuh', so me start to cry to," she recalled.

Brown said she has not stopped crying since it was later confirmed that her daughter's life was snuffed out by a gunman's bullets, minutes after she had got on to a Toyota Coaster minibus that was heading to Mandeville.

Police investigators say gunmen commandeered the bus metres from the Denham Town Police Station and shot her three times in the face after she tried to foil a robbery attempt.

The tragedy unfolded five days before Brown and other family members were to accompany Crystal to a ceremony where she would have been confered with the associate degree in business administration she completed last December.

Colleagues say Crystal quietly attended classes at the University College of the Caribbean.

"She seh the graduation did gone already ... and she get the certificate from December. So Sunday now we were suppose to go to the ceremony because we buy up clothes and everything," Crystal's mother recalled.

"Me foot dem weak. Anyweh me go people haffi deh deh wid me. Me weak and me still not eating," she continued.

Colleagues, including her former commanding officer Senior Superintendent of Police Cornwall 'Bigga' Ford, remembered Crystal as a hard-working, jovial young woman, whom they believed had a very bright future in the Jamaica Constabulary Force (JCF).

During a visit to the Denham Town Police Station yesterday, Ford told The Gleaner that he and members of his senior management team were busy trying to console and motivate her grief-sticken colleagues.

"She's not someone who was comfortable behind a desk. She wanted to go on the operations with her male colleagues. She was one of the bright prospects in the JCF," the veteran crime fighter offered.