Pride, cup and US$Million up for grabs in CONCACAF Gold Cup finals 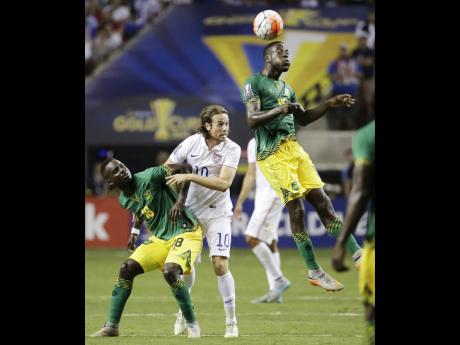 AP
Jamaicas Je-Vaughn Watson, (right),shows the fight of the Reggae Boyz as he goes up for a header in front of teammate Simon Dawkins, left, and United States Mix Deskerud during the second half of a CONCACAF Gold Cup soccer semifinal, last Wednesday.

More than pride will be at stake when the Reggae Boyz face Mexico in the finals of the CONCACAF Gold Cup today.

Already assured of a share of US$500,000 (J$58.5 million), the members of the squad could double that if they pull off the victory and grab the US$1 million first prize.

The Jamaica Football Federation (JFF) had originally tried to retain 10 per cent of the prize money, but caved in to the Boyz, who demanded everything.

"We had promised 90 [per cent of the prize money to the Boyz and the staff] and the Federation was going to keep 10 (per cent), but after the discussions we had prior to the start of the tournament, well, naturally, they (Boyz) were dissatisfied with that, and we decided to award the further 10 [per cent] to them," JFF President Captain Horace Burrell told The Sunday Gleaner.

But despite the JFF not getting any of what has now turned into a substantial payday for the Boyz, Burrell believes the players and coaching staff deserve every cent.

"They are 100 per cent deserving of all that is earned, because indeed, if we had been eliminated at the beginning of the first round, many of them would have got an insignificant amount, which could have been regarded as small change," said Burrell.

"So having taken the decision to perform their best throughout the tournament, the JFF gave a promise that we would share all the prize money won among the players and the staff. I, as president, will not change that. There is absolutely no reason to change our position. They are deserving of it, and even more."