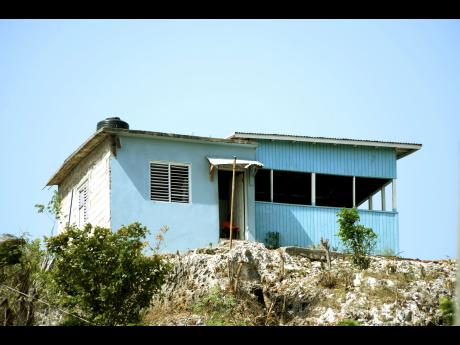 Jermaine Barnaby
The police post in Gravel Heights which was established in an abandoned house after the 2010 massacre. 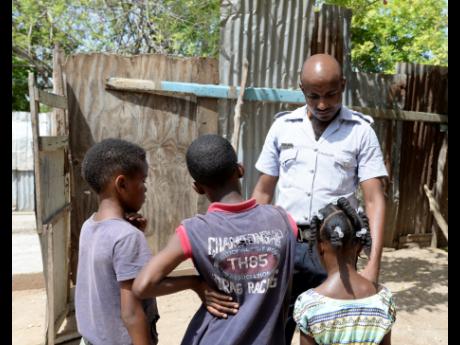 Jermaine Barnaby
Constable Richard Brown spending time with three children who lost their mother in the 2010 massacre in Tredegar Park.
1
2

Having borne the brunt of criticisms over the years from residents of St Catherine, who often blame them for not doing enough to stop the violence in the area, the police can now take a bow as they are being showered with praises by residents of Tredegar park.

Five years after a deadly gang feud reigned terror on residents of Tredegar Park and neighbouring Gravel Heights, forcing several persons to flee their houses, the police are being applauded for bringing the communities back from the brink.

"From the police post was put in the community, things get 100 per cent better," declared Enid Griffith, who said she has lived in Tredegar Park for more than 40 years.

"People who had packed up their things and left the community, after the massacre of eight people five years ago, are coming back because they realise now that the things that used to happen around here stop, because the residents and the police have a very good relationship," added Griffith.

Tredegar Park was rocked when, during the early-morning hours of August 13, 2010, heavily armed men invaded the community murdering eight persons, including three women.

In the aftermath of that massacre, residents fled their homes in fear. However, with the establishment of permanent police posts in Tredegar Park and Gravel Heights, residents said life and optimism returned to the community.

"In the last five years, we have had no violence in this community and that is because of the police," said Lloyd Griffith, who said he had lived in the community for more than 45 years.

"I didn't leave because I had nowhere else to go, but most of these houses on this road were empty because the people were afraid, but they have started to come back. Even on the hillside that used to be dark because of the empty houses, the lights are coming back on now.

He was supported by Antonio Anderson, who lost four members of his family in the August 13 attack.

"About seven man used to get killed over here every week in the war. I remember we couldn't even be on the football field because the gunman them was on top of the hill shooting at us. We had to get flat, so we really grateful for the police post and we thankful for the police, because is them make we can live in peace again," said Anderson

Constable Richard Brown, who was at the police post when The Gleaner news team visited the community last week, confirmed that in the past five years, violent crimes had dramatically fallen in the community.

"Violent crimes have been on the decline in the community because after the murders in 2010, the police made strategic operations to rid the community of criminals and to build a better relationship with the residents, and we are reaping the fruits of that now. The most we will have from time to time is domestic disputes," said Brown, who has been stationed in the community since 2010.

"We are in tune with the community and they are in tune with us. Every resident has my cellular phone number and so whenever there is any suspicious activity they don't hesitate to call day or night, because they know we will be available to them."

According to Brown, the stability created by the police post was the reason many residents who had fled during the upsurge of violence had returned to the community.

"People use to be afraid to send their children to school, but now enrolment numbers are back to normal. You have professionals who were afraid to be in Tredegar Park, whether they were nurses, teachers and doctors, moving back to their homes and making the community better," said Brown.

"The gang feud had tarnished the reputation of the community, but being here, I have come to realise that these are kind, industrious people living in this community and we are working together to keep it that way and keep the criminals out."