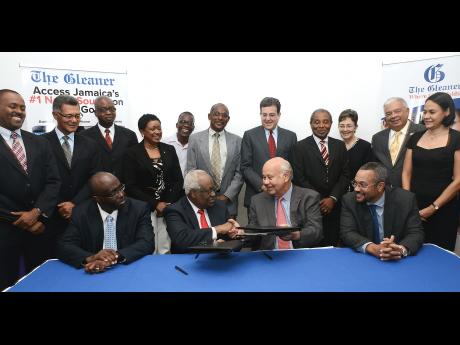 Ricardo Makyn
Radio Jamaica’s chairman, Lester Spaulding (second left), and Oliver Clarke (second right), The Gleaner’s chairman, exchange documents yesterday, signalling the decision to merge the media operations of both companies. They are surrounded by managers and directors of the two media entities. 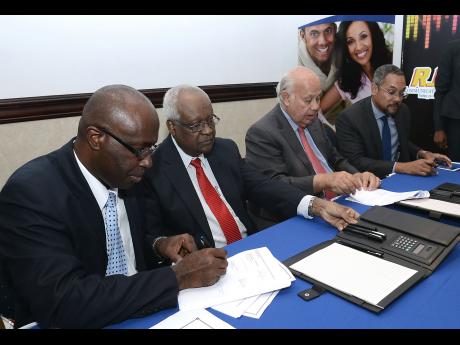 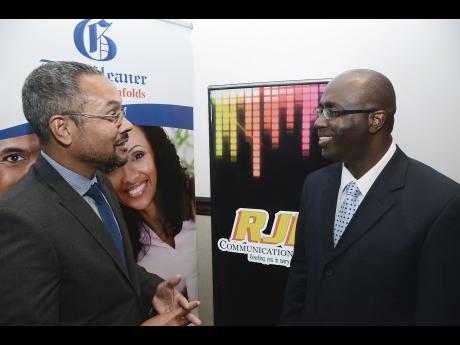 Jamaica's two largest news entities yesterday announced that they would combine their media operations to create the most powerful multimedia outlet in the Caribbean.

The boards of the 180-year-old Gleaner Company and the 65-year-old Radio Jamaica yesterday signalled the historic move, and the Jamaica Stock Exchange has been advised of the proposed deal.

"Survival of Jamaican media in what is a very challenging local climate is the dominant reason" for the decision to combine operations, the companies said. "The local media landscape is dominated by numerous small entities operating from weakened and inefficient financial bases, which threaten the long-term sustainability of the industry."

The transaction, which is to be pursued through a court-approved scheme of amalgamation, will be a stock-for-stock deal, in which Radio Jamaica Limited will issue and exchange 1.2 billion shares on a one-for-one basis to shareholders of The Gleaner Company Limited for 100 per cent of a newly formed subsidiary, Gleaner Company (Media) Limited (GCML), which will hold the assets of the media entities of The Gleaner Company.

The transaction will require the approval of shareholders. Hence, both companies will be required to hold extraordinary general meetings. The process could take up to six months to be finalised.

After the transaction, The Gleaner Company, with its non-media activities, will undergo a name change to avoid future confusion with the media brand to be operated by the merged group.

Radio Jamaica Limited will be the parent company.

The two multimedia companies said "the aim of the merged company is to use the combined strengths of each company's respective credible and award-winning journalism and other content to better inform, educate and entertain the Jamaican public on things relative to Jamaicans everywhere.

"The coming together will allow the combining of each other's rich content while developing new and exciting content, and keeping pace with industry innovations."

The merged company will be led by Lester Spaulding as chairman, with Oliver Clarke as deputy chairman. Gary Allen will be the chief executive officer (CEO) and Christopher Barnes, the chief operating officer (COO). The entity will initially have a 14-member board, seven from Radio Jamaica and seven from The Gleaner Company.

"This is the most exciting development for media in over 50 years," said Allen, who is currently managing director of Radio Jamaica Ltd. "The combination of RJR's and The Gleaner's leadership in print and electronic media, our track record of credibility, our commitment to high journalistic standards and excellent customer service are outstanding positives for stakeholders in both companies."

Allen added that "the companies have been the leaders in all of the industry's most important innovations in media over the last 180 years and this merger will accelerate the pace of that innovation to deliver superior products and services within the highly competitive and dynamic marketplace in which we operate".

Barnes, who is currently The Gleaner Company's managing director, said "this combination creates a stronger company that delivers maximum value for our shareholders, greater career opportunities for our employees and superior experience for our customers".

He added that "both management teams have built industry-leading suites of products and services, and we're excited to be part of delivering all of the possibilities to Jamaican consumers".

Spaulding, Radio Jamaica's chairman, noted that in the current environment, it is important that there be a strong, independent Jamaican media company.

"The current market, with the amount of existing players, is saturated; especially where there is low economic growth. When added to the recent moves by local telecoms to enter the media space, heightened competition is sure to put increased pressure on the industry. It is, therefore, very important that Jamaican media look also to shore up their resources in order to engage in the fast-changing landscape, as well as to preserve the independence required for our media to do its work on behalf of the Jamaican people."

The management structure of the combined entity will be set up to best cover the operational lines of the business as well as their associated administrative support needs, the companies said. The CEO and COO will be responsible for selecting and implementing "the most appropriate structures".

While stating that the speed at which each adapts to and negotiates this transition is critical, the companies said the merger of resources and products allows the companies to accelerate digital transition through leveraging of a larger resource base and combining the unique expertise from each other's core business.

"The opportunities resulting from this coming together are many. However, we are excited at the prospect of expanding advertising options and packages for our clients as well as leveraging our content for wider distribution on established and new platforms," read the statement.

Both companies have emphasised that recent moves by the large foreign-owned telecom players have introduced a new dynamic, as they themselves are increasingly offering media services, competing for local advertising dollars with the traditional players.

"Our two entities have sought to counter these developments by consolidating to shore up our financial bases in preparation for the heightened competition. Further, both companies are faced with challenging transitions, which, in time, will see revenues increasingly dominated by digital revenue as media platforms converge," read the statement.