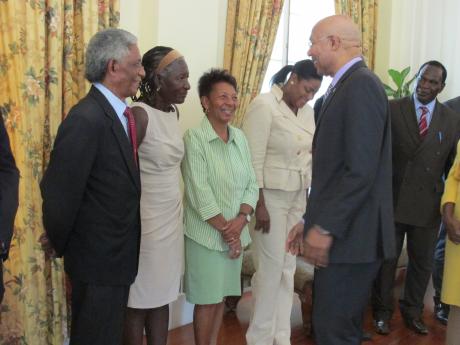 In this the 150th anniversary of the Morant Bay Uprising, the St Thomas Parish Development Committee is hosting a series of events and activities.

Yesterday, some members of the committee - Custos Marcia Bennett, Mayor of Morant Bay Ludlow Mathison, and the two members of parliament for the parish, Fenton Ferguson and James Robertson - made a courtesy call on Governor General Sir Patrick Allen at King's House.

Errol Greene, secretary manager for the St Thomas Parish Council, in outlining the reasons for the visit, said they were in keeping with the significance of the 150th anniversary activities. He said the visit was to present Sir Patrick with a St Thomas parish profile, to get him to consider a proclamation making October 25 Paul Bogle and the Martyrs Day, to apprise him of the calendar of events, and to ask him to be patron of one of the events.

In response, the governor general said the requests can "easily be fulfilled", and it was his pleasure to be meeting with the people of the parish, which, he said he had visited more than other governors general, as he has relatives there.

Yet, he said he was disheartened with the state of the parish, especially the bumpy road from Bull Bay to Phamphret.

The situation, Sir Patrick said, turns everybody off, and he appealed to the committee to get the political representatives in the parish to intervene in the matter.

Something has to be done, he said. He also bemoaned the lack of rapid development in the parish, and said he believed that no support or attention is being given to the entire eastern belt.

Eastern Jamaica, including St Thomas, the governor general said, is unique in terms of what it has to offer.

He made an impassioned reference to the views from The Blue Mountains, which he said the committee should highlight more.

They have to sell the parish positively to attract investments, for which construction of a highway is critical.

In response to the issue of the significance of the commemorative activities, he questioned the delegation, regarding, what they hoped the events would achieve.

He wanted to know whether they were just a "rehash" of the events of the rebellion, making it clear he had not forgot his past and was deeply connected to his roots.

"While we cannot forget our past," he said, "we cannot be trapped in it."

In responding, Professor Neville Ying, a member of the committee, said the greatest legacy the parish has to take it forward is what happened in 1865.

The committee wants to heighten development through the definition of specific projects, he said.

Education is key to the plans, and the support of the diaspora would be

enlisted for health and educational development.

Sir Patrick commended the committee for its work and said he hoped that from this committee would "emerge a bright vision, a catalyst for what St Thomas will be in the future".