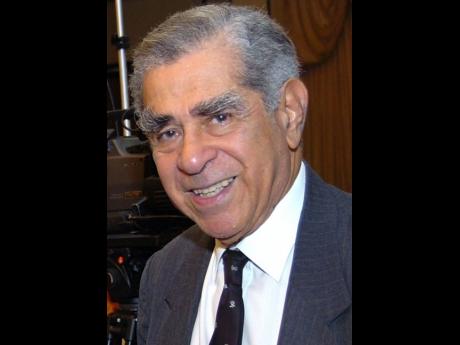 Chairman of the Manatt-Dudus Commission of Enquiry and former senator Emil George died yesterday at the Medical Associates hospital in St Andrew, after ailing for some time.

The Queen's counsel, who made headlines as chairman of the Manatt-Dudus Commission of Enquiry, was 84.

Well known for his long association with the Jamaica Labour Party, in 2010 George was appointed chairman of the three-man commission of enquiry to examine the issues related to the extradition request for former west Kingston strongman Christopher 'Dudus' Coke, and the circumstances under which United States law firm Manatt, Phelps & Phillips was retained.

Christopher Bovell, a partner at law firm DunnCox, where George had been a senior partner and consultant, said he was a great asset to the firm and to the legal fraternity and that the company regretted his passing.

George, who was born in Dominica to Elias George Merchant and Theresa Benjamin-George, was in 1955 called to the bar of England by Gray's Inn, and was later admitted to the Bar of Jamaica in 1956. He was appointed Queen's counsel in 1970.

Serving stints as chairman of Wray & Nephew Group Ltd, director of Seprod Group of Companies and president of the Jamaica Employers Federation, he had an illustrious career and was appointed to the Order of Jamaica in 2002.

A Roman Catholic, in 1960 George married Dr Pamela Ann Richards, with whom he had two sons.

CORRECTION: This article had previously stated that George was born in the Dominican Republic. That was incorrect. He was in fact born in Dominica.