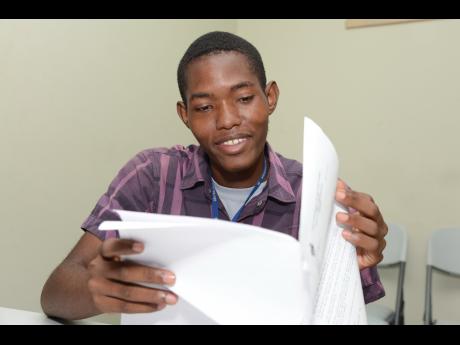 Rudolph Brown
Jahni Campbell ... I know it's going to be hard, but I am determined to make it.

When Jahni Campbell went to the University of the West Indies (UWI), Mona, on Monday to collect his offer letter to read for a degree in medicine and surgery, he could not help but celebrate his conquest. The journey to this moment has not been an easy one for him.

"I told you I would be back!" he said in defiance as he pointed at the The Faculty of Medical Sciences' Teaching and Research Complex.

It was the second time around that the Kingston College graduate was making the trip to UWI to learn of his fate.

The showers of rain, which began pouring from the sky immediately after he collected his offer letter, seemed to confirm the good news.

On his first attempt at applying to the university, he secured a place in the medical sciences programme, but to his dismay, it was not the govern-ment-sponsored space he was hoping for.

Given that he is from a low-income home, where his mother continues to struggle to find the bus fare for him to get to school, Jahni knew he would not be able to take up an offer where he would have to pay the full cost for the medical programme.

With this knowledge, he devised a strategy, which would see him get a government-sponsored space in the programme.

"My journey started with some disappointment because I did not get enough points to get a government-sponsored space, so what I had to do was resit some of the CAPE (Caribbean Advanced Proficiency Examination) subjects in order to achieve the required points," he told The Gleaner.

He went on to describe the motivating force that drove him to resit the exams at a private institution, a venture he paid for with his own savings and with help from family members.

"I felt somewhat down because I said I put out my effort while others were enjoying themselves," he said.

"Many of my friends would say to me that every day I am in the books and that I should enjoy myself more, but I chose not to. I chose to sit down and do my labs. Sometimes I skipped lunch to do my labs, so I felt down when I got the full (unsponsored) offer, but when I learnt that I could resit the CAPE exams and reapply to UWI, I had to do it because I have this dream of becoming a doctor, and nothing will stop me from accomplishing that."

When asked why he wants to be a doctor, Jahni recalled his experience in hospital as a child.

"When I was a child, I was at the Bustamante Hospital and the life machine for someone started to make this noise and I saw doctors rushing to save that child's life, and in the end, they did, and I was there as a child looking at it and I was inspired by that, so I said I wanted to do this as well to save someone's life," he reflected.

While he was reluctant to provide full details about his economic circumstances, Jahni disclosed that he had to walk to school on occasions because his mother just could not find the taxi fare.

"Financially, it is difficult because I know that I will not be able to afford the textbooks and the equipment that I will need. Another problem, too, is that my community - Torrington Park - is volatile at times, so there will be that issue of coming in late at night from school ... . I know it's going to be hard, but I am determined to make it," he said.