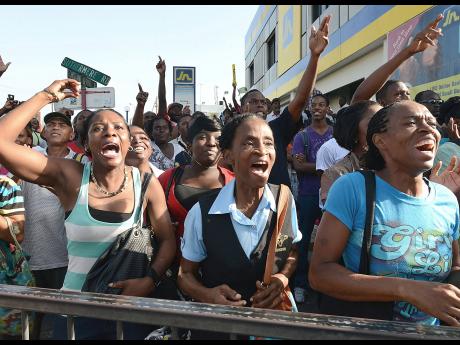 Ian Allen
A section of the crowd that gathered in Half-Way Tree, St Andrew yesterday morning to watch Jamaicans competing at the IAAF World Championships in Beijing, China.

The IAAF World Championships finals of the women's 200 metres, the 110-metre hurdles for men, and the 100-metre hurdles for women held the attention of Jamaicans who gathered in Half-Way Tree, St Andrew, yesterday to watch the races on the big screen.

Traffic came to a near-standstill before the start of the women's 200 metres, creating an atmosphere of anticipation.

Cheers erupted as Jamaica's Elaine Thompson appeared on the screen, signalling that she was the favourite of many in the crowd.

"A my girl that! A she mi want to win," one woman shouted.

While Thompson did not win the race, many persons expressed satisfaction that Jamaica secured the silver and bronze medals in the event.

"We would have liked the win, but, at least we get second and third, so I am very proud of (the athletes)" a spectator told The Gleaner.

The men's 110-metre hurdles attracted a new set of persons to the area in front of the big screen. This time around, Omar McLeod was being touted as the favourite to win.

A female police officer who came on the scene parked her bike just in time for the race to start.

"Run, boy, run!" she shouted at the screen, while others in the crowd jumped and cheered as the race progressed.

"Hansle Parchment has a problem with his start, so to see him come second is a bit surprising. I was expecting more from Omar, but he ran well," one spectator said.

The results of the female 100-metre hurdles also came as a surprise to many of the spectators.

Danielle Williams topped the morning with a surprise gold in the race.

"I feel proud that we won the gold for that one. No one was expecting Danielle to win, but she showed that Jamaicans are really exceptional," one woman told The Gleaner.