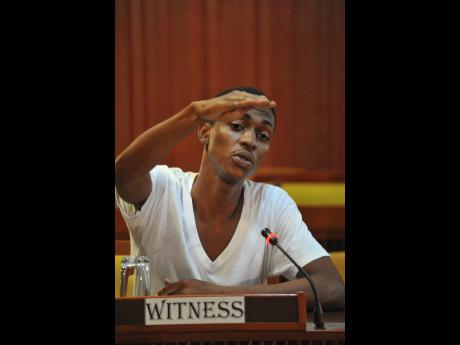 Marjorie Hinds fought to hold back the tears as she recounted yesterday how a "bomb" struck her during the police-military operations in her west Kingston community of Tivoli Gardens five years ago and left her hospitalised in a "vegetative" state.

"When me a come back roun' [to her home], the something ketch me. The bomb, [it] lift me up off a di ground and fling me out inna the road and buss up me face. I don't know nothing more after that," Hinds told the west Kingston commission of enquiry, which resumed hearings at the Jamaica Conference Centre in downtown Kingston yesterday.

Hinds said when she regained consciousness several days later, she was at the Kingston Public Hospital with numerous injuries and was unable to move.

"Me bottom burn up, me foot burn up, me [right] hand disable, me can't work fi di rest a me life. A couldn't walk, a couldn't help meself. I was vegetable, me gone back to baby stage," she said through sobs.

Her attempts to remain composed soon proved futile and the mother of five children broke down in tears after a photograph showing her badly bruised face - one of 12 that were to be viewed by the three-member panel - was mounted on a screen.

"Can she handle this? Don't do it [show any more pictures]. This is putting too much trauma and stress on this lady," chairman of the commission, Sir David Simmons, interjected.

Hinds was one of two Tivoli Gardens resident who gave evidence about injuries and damage to property they claim were caused by explosive devices during the May 2010 operations to capture then fugitive Christopher 'Dudus' Coke.

'he got it terribly wrong'

Another west Kingston resident, Romaine Walker, recounted how at least 10 "bombs" landed around his Lewis Path home shortly after the police-military operations began and blasted statements by retired army chief, Major General Stewart Saunders, that the mortar rounds used by the military were designed to keep residents out of harm's way.

Walker said after the first set of "loud explosions", he "felt the whole place shake" and later saw Hinds and two men he identified as Karl George Henry and Bojon Rochester lying on Chang Avenue wounded.

According to him, Henry - who he saw bleeding from the head and crying for help - and Rochester later died during the operations.

Attorney-at-law Lord Anthony Gifford, who is representing the Office of the Public Defender (OPD), later revealed that a postmortem report showed that Henry's body had 14 fragments, while Rochester's had lacerated wounds and gunshot wounds.

"I don't know how the general [Saunders] is going to explain this one, but he got it terribly wrong, though," said Walker.

Saunders, the Jamaica Defence Force (JDF) chief of defence staff at the time and now permanent secretary in the national security ministry, has already given evidence that the use of mortars during the operation was his decision and that they were used in open areas far removed from civilians.

But Walker recounted that he was standing in his yard on May 24, 2010 when a "bomb" ricocheted off a tree and damaged a section of his neighbour's home.

He said about a month after the incident, his neighbour, Michael Williams, informed him that he found a mortar shell in his yard and showed him a picture on his cell phone.

Walker said he did not actually see the mortar shell until 2012 when he took it to the OPD and conceded, during cross-examination by attorneys for the JDF, that he did not see where Williams found it.

Hinds will continue giving evidence when the hearings resume today.