I'm not missing in action, Portia declares ... says she has no problems in the PNP 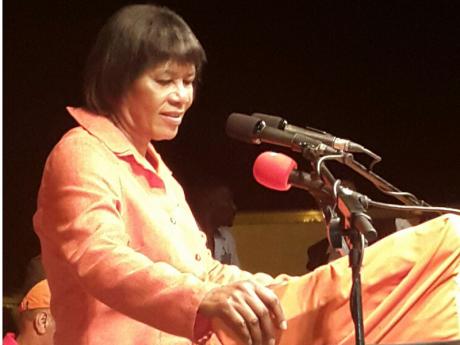 Simpson Miller ... I don’t have any problems in my party, I am the leader and I lead from in front, not behind.

People’s National Party (PNP) president, Prime Minister Portia Simpson Miller has rejected claims that a lack of leadership is to be blamed for the problems now bedeviling the party.

Addressing the annual conference of her South West St Andrew constituency Sunday evening, Simpson Miller pointed to a story in The Sunday Gleaner where some political analysts claimed a leadership vacuum in the PNP was the reason for the increasingly bitter contests for the right to represent the party in some seats in the next general elections.

With embattled candidates Raymond Pryce, Damion Crawford, Lisa Hanna and Patrick Atkinson, behind her on the stage, Simpson Miller argued that the challenges are part of the democratic process in the PNP.

According to Simpson Miller, anyone who thinks she is missing in action needs to have their heads examined.

READ: Where is Portia ... Lack of leadership listed among reasons for problems in PNP

"The People’s National Party is not like the other party.  We have a system where the officers of the party meet if there are difficulties and have discussions, not the party leader behaving like a dictator," declared Simpson Miller.

Returning to the issue later in her presentation, Simpson Miller repeated her claim that the PNP is a democratic organisation.

"I want to respond just to the headline of The (Sunday) Gleaner ... The People’s National Party is not a party where the party leader can be a dictator.  We have officers, we have systems and we maintain the principle of this noble movement.

"Where if there is a challenge anywhere officers meet, have a discussion and then they make a decision.  I am not a dictator, I am a democrat," trumpeted Simpson Miller.

The PNP has postponed the selection contests in at least three constituencies where sitting members of parliament are being challenged because of issues including disputes over the voters list, a court challenge and disruptive street protests.