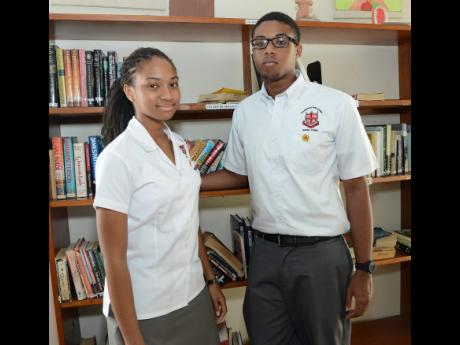 Jared Johnson's main goal going into the Carib-bean Secondary Education Certificate (CSEC) examinations was to receive grade ones in all his subjects.

The 16-year-old did just that after passing all 10 subjects - biology, Caribbean history, chemistry, English A, English B, French, information technology, mathematics, principles of business, and Spanish.

The Campion College student noted that though the preparation process is demanding, it is critical that students be prepared to make sacrifices.

"Even though my ultimate goal is to do law, I made sure I did a mixture of subjects. Initially, I didn't know what I wanted to do, but I have no regrets, even though the preparation process was sometimes daunting," he said.

"It wasn't easy; it was very demanding. The exams demanded a lot of time, effort, and preparation. Even though we got a couple of weeks to stay home and study, I still had to ensure that I didn't get distracted because it's not always easy to remain disciplined," he said.

Pointing to the significant decline in the science subjects this year, he said he, too, was perturbed but was still determined to do his best.

"Going into the science exams, there was a sense of unease, especially for the chemistry exams, and that was shared among my peers because in the last part of the school year, we heard that there were some changes, and we pretty much had to adjust. In the end, it all came down to who wanted it most, and I was determined to excel," he said.

Jacquel gained five ones with straight-A profiles in unit one of the subjects she sat - biology, chemistry, communication studies, literatures in English, and Spanish.

"Having the drive and taking charge of your own studies is critical. You have to be prepared to go the extra mile and keep on top of your studies. You won't be successful if your method is to study at the last minute. It takes a lot of sacrifice," she said.

"Chemistry, in particular, was difficult. There were some issues for me in terms of the format of the exam. I was almost in tears because I just thought that I would have messed up, but I consoled myself with the reminder that I studied and that I did my best, and to see that I actually got ones with straight-A profiles! I am absolutely proud of myself!" she continued.

Jacquel added: "The day when the results were released, I was really nervous, especially because I had my reservations about chemistry. In the end, the hard work paid off. I am overjoyed!"