Who are the funders? ... campaign financing bill to be in Parliament next month 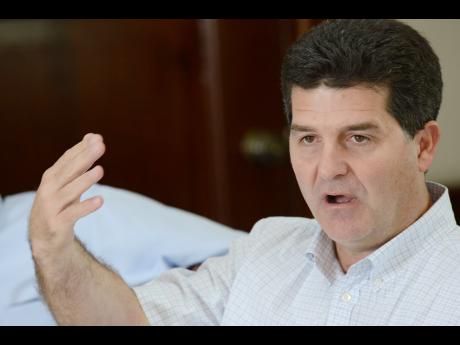 With A general election expected in a few months, the calls for legislation governing campaign finance reform are getting louder.

The National Integrity Action (NIA), the Private Sector Organisation of Jamaica (PSOJ) and the Jamaican Bar Association yesterday said that the public interest demands that the Government, with urgency, enact the "long overdue and necessary" legislation "to advance more effective regulation of money in politics".

William Mahfood, president of the PSOJ, told The Gleaner that Jamaica had long advanced beyond the stage where there was a feeling that disclosure of political donation would lead to victimisation.

"If we are going to grow in a sustainable way, people will have to have a sense that there is proper accountability and transparency in government," said Mahfood.

But it seems as if the long wait for the campaign finance reform bill is about to come to an end, as leader of government business in the House of Representatives, Phillip Paulwell, said yesterday it would be in Parliament by next month.

"Barring any unforeseen issues, we should have the bill in Parliament by October," Paulwell told The Gleaner.

He said that it was on Friday that he got the bill back from the Office of the Chief Parliamentary Counsel and would be taking it to the legislation committee of Cabinet within the next two weeks.

"The delay has nothing to do with politics. The initial bill was reviewed by the Electoral Commission. Several issues were identified and amendments had to be made," Paulwell said as he sought to explain the delay.

The parliamentary Opposition said it was anxious to see the bill tabled in Parliament. Derrick Smith, the leader of opposition business in the House of Representatives, told The Gleaner that the issue of the campaign finance bill came up recently when both parties agreed on a date for the commencement of the debate on three Caribbean Court of Justice bills in the Senate.

"I never got a date out of him in terms of when it is likely to take place," Smith said of a conversation with Paulwell.

"Political parties have from time to time been badgered about getting their house in order in terms of the source of their financing ... . It has taken a long time and it seems to suggest that the politicians are not serious about it. I can assure you that we are, but we are not the persons who are going to be initiating it and we are waiting on the Government to bring the legislation," Smith said.

Parliament in 2013 approved a report from the Electoral Commission of Jamaica (ECJ) for the proposed campaign financed bill, which, among other things, suggests the banning of contributions from foreign governments, foreign government entities and unregulated financial organisations.

The ECJ report also proposes that the identities of big donors and contributions with large government contracts be disclosed, and for a limit to be set on how much money can be spent in any election by candidates and by parties.

A limit is also to be set on how much any individual can contribute to any candidate or party.

"The total lack of openness regarding political party election funding keeps the electorate in the dark, fuels distrust of parties amongst large sections of our people, and separates Jamaica from the world of modern democracy. Our country has a strong international reputation for robust electoral administration, developed over many years," the NIA, the PSOJ and the Jamaica Bar Association said in a joint statement.

It added: "To enhance this reputation and at the same time strengthen Jamaica's system of democratic governance for the benefit of our people now demands that the Government and Parliament delay no further in the statutory regulation of campaign financing."

Smith said yesterday that the Opposition had not been pushing for the bill but was hopeful it would be brought to the Parliament soon.

"We really have not been beating on the door ever so often and asking, what you are going to do about it?" he told The Gleaner, while adding that assurance has been given that "it should be up for debate shortly".

"We would have expected that it would have been here from last year, notwithstanding the sort of work the legislative people seem to have doing, but it has taken much too long," he said.