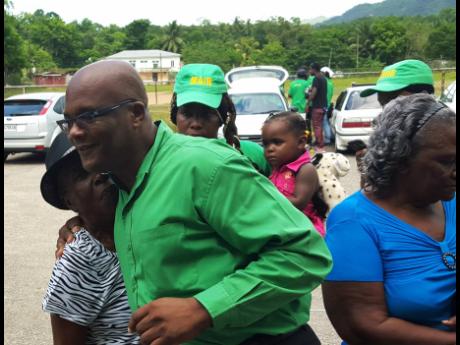 "Hi, Uncle Les," was the familiar greeting from constituents.

"When Member of Parliament Gregory Mair resigned, I was bombarded with appeals to come forward," Campbell told The Gleaner.

"The people were adamant that they would not be endorsing anyone else," he added.

In an overwhelming show of support, JLP delegates in the constituency voted on Saturday for Campbell over Sharon Hay Webster - 111 to 36 votes.

Campbell is a lawyer by profession and the current deputy of treasurer of the JLP.

Campbell entered representational politics in 2007 in the then East Central St Catherine constituency but was defeated by the People's National Party's (PNP) Natalie Neita Headley.

"Since then, I have not been in representational politics as it were," said Campbell. "But I have been serving the JLP in different capacities."

Having secured the support of the JLP delegates in North East St Catherine, there are, by Campbell's account, two things immediately on his agenda.

The first, he said is to reengage and re-energise Labourites who have been distracted by the squabble in the constituency.

The second is to lead an initiative to get water flowing in the drought-wrought constituency in which there is water to be harnessed.