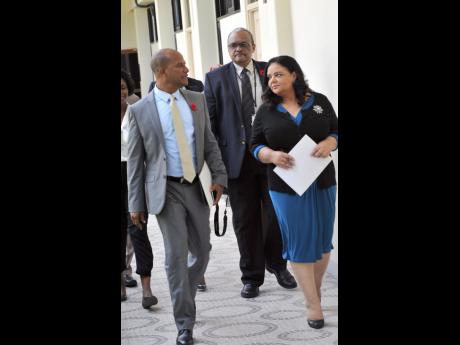 National Security Minister Peter Bunting yesterday labelled as "hypocritical" the posturing of the parliamentary Opposition on the proposed prison deal with the United Kingdom.

"This is nothing but pure, vulgar, political hypocrisy and theatrical opportunism," said Bunting of the commotion that led to a walkout of the Opposition during Tuesday's sitting of the House of Representatives.

Bunting maintained during yesterday's Jamaica House briefing that Government's motive for considering a prison-transfer deal is to facilitate the modernisation of Jamaica's correctional service.

He said this was intended to substantiate his claim that the Jamaica Labour Party (JLP) has, in the past, endorsed likely prison deals with the UK.

Bunting took up where he left off on Tuesday in castigating the Opposition. He referred to comments attributed to Nelson "to expose the level of hypocrisy that they are demonstrating".

Bunting pointed to a 2013 newspaper report which quoted Nelson (in his capacity as former national security minister) responding to Cameron's UK prison plan.

"I had discussion with them to work out a quid pro quo, where they would finance the facility and we would see how best we can accommodate the 800 prisoners they wanted to have returned," Nelson was quoted as saying.

Bunting noted that the report stated that "Following the discussions with two British Cabinet ministers, Nelson said the plan was shelved as the UK experienced its share of financial constraints caused by the recession."

Continued Bunting: "Between 2010 and 2011, another proposal was placed on the table. This time, he said, by a private British company and a Jamaican company, but that, too, was shelved due to the inability of the Jamaican Government to make any financial contribution."

Bunting also poured scorn on a suggestion by Opposition Spokesman on Justice Delroy Chuck to finance the construction from either the National Housing Trust or the National Insurance Fund.

He said it was the parliamentary Opposition which has in the past raised concern that the funds in those institutions are being depleted.

"So they would be defeating their own argument," said Bunting.

Added Bunting: "So the theatrics and objections that were raised in Parliament are really quite hypocritical."

He said the recently signed memorandum of understanding between Jamaica and the UK is likely to lead to the latest in the series of activities to modernise the sector - activities in which the JLP administration was involved during its tenure.

"The discussions on assistance from the British to build a new prison and facilitate the transfer of Jamaicans being held in British prisons has been going on for a long time, including with the JLP administration between 2007 and 2011," asserted Bunting.

He added: "For over 20 years, successive administrations have recognised the urgency of replacing the two slavery-era [penal] facilities, and with the best intentions."

He said that before this, no tangible progress was made on the project as the capital cost is not only prohibitive but it always competed with other urgent demands in health, education and infrastructure, among others.

"Perhaps that is why we have not been able to do anything material," he said. "If we could have funded this from our Budget, we would have done that and there would be no argument."

Bunting said it was, therefore, imperative, notwithstanding the fiscal constraints, that the more than 3,000 Jamaicans in Jamaican prisons, 60 per cent of whom are not hardened criminals, should get a better deal.

"We feel £30.5 million is significant, and we have agreed to commence a process based on that conditional offer that we would seek to engage Parliament and the public around the issue," he said.