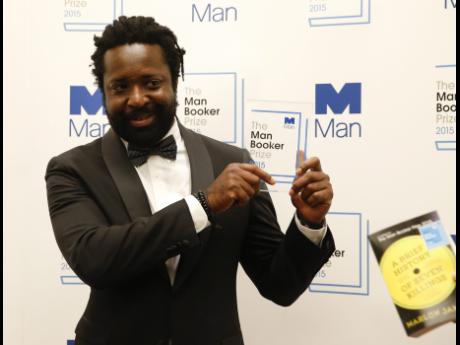 File
Jamaican author Marlon James holds the award after his book, 'A Brief History of Seven Killings', was named as winner of the 2015 Booker Prize for Fiction during a ceremony at Guildhall in London, England, yesterday.

"I think it's absolutely wonderful that Marlon James' novel has won this distinguished prize. He's a great writer. We saw the promise in his earlier books, and to get this major prize is a fantastic milestone in his career," declared Carolyn Cooper, professor of cultural and literary studies, yesterday.

Cooper was reacting to news that the Jamaica-born author had won the prestigious Man Booker Prize for Fiction.

The 44-year-old James won from an impressive field of six literary stalwarts for A Brief History of Seven Killings, the 680-page chronicle of political violence in Jamaica and the spread of crack cocaine in the United States of America, which centres on a 1976 attempt on the life of reggae superstar Bob Marley, who is never named in the book. The prize comes with a £50,000 cash award.

The first Jamaica-born author to be shortlisted for this prestigious award, James' accomplishment is all the more significant since this is only the second year that the prize, first awarded in 1969, has been open to writers of any nationality, writing originally in English and publishing in the United Kingdom.

Previously, the prize was open only to authors from the United Kingdom and the Commonwealth, the Republic of Ireland, and Zimbabwe.

Cooper, who has long been a staunch advocate of greater acceptance of the Jamaican language, also hailed this significant achievement as validation.

"Those people who keep saying Jamaican is not a language and you can't use it anywhere but in Jamaica will have to back-back and shut up because here is a major literary prize acknowledging the language of Jamaicans as a serious language of creativity.

"Marlon's undergraduate degree from UWI (University of the West Indies) is in language and literature, so he completely understands the importance of getting the language right in fiction," she told The Gleaner.

However, Cooper, who teaches literature at UWI, Mona, had some reservations about the novel.

"There's just too much violence. It's a lot more than seven killings. Unfortunately, the novel reinforces the image of Jamaica as a murder zone, and I think it could have been more tightly edited. It's just too long. That said, I'm really proud of Marlon's accomplishment. And we also have to acknowledge the role of local literary events in supporting writers," she said.

"Marlon 'buss' on the Open Mic at the Calabash Literary Festival, and this year, he won the fiction prize in the Trinidad and Tobago BOCAS lit fest. So Marlon's winning the Man Booker Prize is an occasion for celebrating all the writers in the region and in the Caribbean diaspora. Big up! Big up! Big up!"

Michael Wood, chair of the judges, was also clearly very impressed, describing A Brief History of Seven Killings as the "most exciting" book on the shortlist, admitting that the judges had come to a unanimous decision in less than two hours.

Woods praised the book's "many voices", which "went from Jamaican slang to biblical heights", but is reported to have acknowledged that some of the "rough stuff" might be much for some readers.

He said: "One of the pleasures of reading it is that you turn the page and you're not quite sure who the next narrator will be."