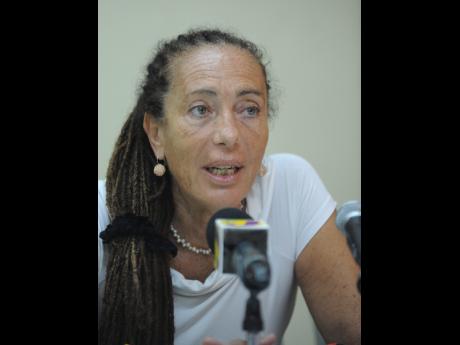 While founder of Stand Up for Jamaica and Italian Consul to Jamaica Carla Gullotta is making it clear that she is not in support of the illegal use of phones and the Internet in prisons, she is making a case for supervised use, given the need for inmates to keep in touch with family and do research as they prepare for the Caribbean Secondary Examination Certificate (CSEC) exams.

"I don't support illegal cell phone use in prisons, no one can support whatever is illegal," she said. "Illegal activities need to be reprimanded but on the other hand, we need to see the reasons why it is so widely spread," she said in an interview with The Gleaner.

An expose published by The Gleaner some weeks ago highlighted the social media postings of inmates at the Tower Street Adult Correctional Centre, who have been accessing the Internet via smartphones.

The inmates are not allowed to have cell phones and The Gleaner expose has raised fresh questions about how they are able to access the smartphones.

Gullotta, who works in the prisons through her NGO, Stand Up for Jamaica, believes that putting more public telephones and providing guided access to the Internet, in the prisons, could decrease the tendency of prisoners to use illegal cell phones.

"In Fort Augusta and the South Camp facility, there is a public telephone. Those public telephones allow inmates to speak with their families and their children and might be a very useful instrument to avoid the use of illegal ones," she said.

Gullotta explained that a lot of inmates, in particular females, are worried about what happens at homes. The concerns, she said, surround the well-being of their children and can be a source of distress for the inmates.

"The possibility to access a small call centre or a public phone in the institution will ease off some of the pressures (created) from the idea that something wrong can happen to their families," she added.

In regards to inmates using smartphones to access the Internet and post on social media, Gullotta wants it to be stamped out, but is advocating for an increase in guided access to inmates who are preparing for the CSEC exams.

"I think we should be very careful with that (inmates posting on social media) because it is not controllable and it is very difficult to find out what kind of information is flowing. I do not think that is something they should do freely. The only thing I think we should try to improve is that (during) school time, students can be allowed to research, especially now that they do the CXC. I think that a guided access to computers (during) the school time, with the teachers and the officers, can be beneficial," she said.