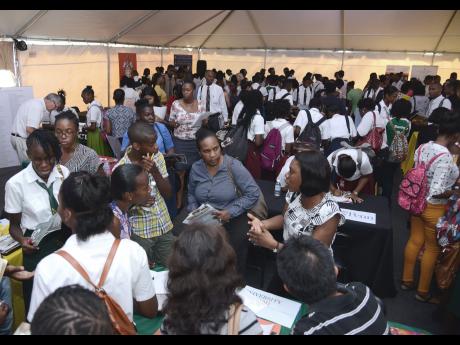 A section of the large crowd of prospective students who atttended the college fair hosted by the American International School of Kingston at its campus located at 2 College Green Avenue, Kingston, yesterday.

Oversubscribed best describes yesterday's college fair hosted by the American International School of Kingston (AISK) at its campus located at 2 College Green Avenue, Kingston, where hundreds of prospective college students turned out to get information on the entry requirements for a number of tertiary institutions in the United States of America, with the University of the West Indies, and Northern Caribbean University among the local institutions represented.

And another full house is expected for today's session of the fair, which takes place at the Hillel Academy, starting at 1 p.m. It is a continuation of the joint effort between the United States Embassy in Jamaica, AISK, and Hillel, both of which previously held separate college fairs, but, in recent years, have seen the benefit of joining forces.

So if you missed yesterday's fair, Nicole McLaren Campbell, director of college counselling at AISK, had this invite: "Tomorrow (today) it's the same thing, so if you didn't make it here today, then come on out, and I have to highlight that we have some workshops starting at 4:30 (p.m.).

Yesterday's fair saw youngsters from schools across Jamaica questioning representatives of the different American colleges, and they seemed to have been well prepared, with more than enough persons and brochures on hand to answer their many questions.

McLaren Campbell admitted to being caught up in the excitement of the activities.

"We worked very hard on this fair, and so we are very pleased with the turnout. Hundreds and hundreds of students have passed through here, if not thousands," she told The Gleaner.

"We did expect the turnout, and we worked really hard to ensure that everybody knew it was happening and they knew what was available here for them today."

Eva Barnes, USAID adviser, also encouraged Jamaicans looking to further their tertiary education to turn out for today's closing-day session, which she described as a very good learning experience.

"We invited American colleges to come down and promote their different programmes to Jamaican students. Of course, there are already many Jamaicans studying in the United States, so it's just a way of bringing the programme to more Jamaicans. It has been very successful, and if for nothing else, students have become aware of the programmes that are at the American universities," Barnes said.

She urged students to also participate in the workshops, which they should find very instructive.