'Carnival of overspending' at HAJ 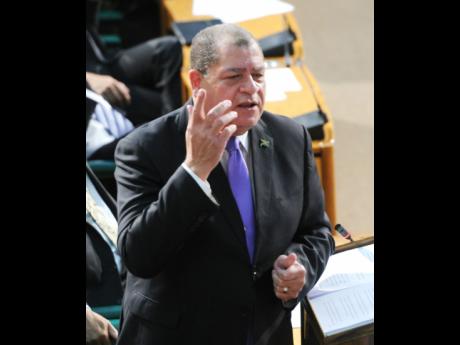 THE FINANCIAL affairs and operations of the Housing Agency of Jamaica (HAJ) have come under intense scrutiny by its parent ministry and Auditor General Pamela Monroe Ellis as well as the Office of the Contractor General.

Yesterday, Opposition Spokesman on Finance Audley Shaw described a plethora of breaches of government guidelines at the HAJ as a "carnival of overpayments and irregularities".

Shaw's comments came during a meeting of the Public Admini-stration and Appropriations Committee, which had summoned the HAJ to discuss its budgetary targets and expenditure since the start of the fiscal year.

Shaw raised concerns about a number of issues, which he said needed an urgent response from HAJ officials.

HAJ Managing Director Karl Bennett said the agency has been audited by both its parent ministry and the auditor general. He said the contractor general is also making enquiries at the agency.

The Gleaner obtained a copy of the ministry's audit, which, among other things, stated that no approval was granted by the Ministry of Finance for the employment of a bodyguard assigned to the managing director. The bodyguard was employed from a private security firm and is assigned a fully maintained motor vehicle to which a toll tag is attached.

Questions were also raised about the unauthorised withdrawal from Bernard Lodge depositors' accounts.

According to the audit, the minutes of the board of directors were reviewed for February 2014, and it was observed that $45,915,240 of customers' deposits for a Bernard Lodge project was withdrawn by the senior manager of finance and information. The funds were used for payments to the National Housing Trust, payroll, and to contractors without the requisite approval of the managing director and the board chairman.

Permanent Secretary in the Ministry of Transport, Works and Housing Audrey Sewell confirmed that action was taken against a senior manager for the withdrawal.

The audit stated that the senior manager of finance and information was suspended without pay for one week, from February 14 to 20, 2014. However, the audit pointed out that this decision was later reversed by the current board chairman and the managing director by a letter sent to him on April 28, 2014.

A Ministry of Finance and Planning circular number 17 on Control of Deposit, dated September 24, 2003 (Section 3.5) states: "Deposit funds must not be borrowed or used to provide temporary budget support to the ministry, department or agency. Deposit funds must be used solely for the purpose for which they were received."

The audit also revealed that the managing director and senior manager, legal services and corporate secretary were both paid advance on their gratuities before completing the required two years on their initial employment contracts.

Gratuity for the managing director was approved by the board chairman on March 24, 2015, citing medical expenses for his spouse.

With respect to the senior manager, legal services and corporate secretary, the audit stated that gratuity was "requested" and paid before the requisite period, which was approved by the managing director.

The audit stated that both employees' contracts explicitly said that performance-based compensation will be paid in accordance with government guidelines. According to the ministry's audit, there was no evidence on file to state that a satisfactory evaluation was completed for both personnel.

Ministry of Finance Circular Number 15, dated May 8, 2012 on Fixed Term Contract Officers Guideline Section 5 (II), states that gratuity for local contract officers is payable up to a maximum rate of 25 per cent of basic salary earned for the contracted period of not less than two years in the first instance.

However, it says subject to the terms of the contract and the availability of funds, gratuity may be paid annually after the first two years of continuous contract service, provided that any subsequent contracts are a minimum of two years in duration.

It was revealed during the committee meeting that the audit was completed from July and a response was sought from the HAJ. However, to date, the agency has not responded to the findings of the audit.

Asked why the HAJ had not responded, Bennett said his agency had resource constraints, noting that agency had to be responding to several audits, including queries from the contractor general.

The ministry's audit team also found that the senior manager, legal services and company secretary was paid seniority allowance of $13,155.75 per month, with effect from October 1, 2014, despite not completing a year of employment. This employee's contract was for the period February 5, 2014 to February 4, 2017.